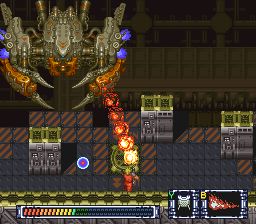 Jaleco is one of the few publishers that I don’t really have a strong opinion of.  Throughout the 8 & 16-bit era they released many titles however outside of the Bases Loaded and Rushing Beat series never managed to achieve a breakout hit.  It always seemed as though the majority of their output were right on the cusp of greatness but held back by one or two flaws.  The few that overcame this stigma were truly excellent but sadly overlooked such as Astyanax and Shatterhand.

Operation Logic Bomb is one such title, an enjoyable overhead shooter that combines many different elements to become greater than the sum of its parts.  Why it flew so far under the radar is a bit of a mystery but I’ll guess the box art played a part.  The comic book style cover art isn’t exactly the greatest and while it certainly helped it stand out judging by the game’s obscurity it wasn’t enough.  This wouldn’t be the first time Jaleco tried this; their fighting game Tuff Enuff has even worse box art and makes me want to punch its cover monkey rather than give the game a spin.  Nothing wrong with a little outside the box thinking but when you go too far you end up with this:

At a hidden laboratory an experiment using interdimensional technology goes awry and all contact is lost.  Because of the lab’s failure the barrier between worlds has been broken with mysterious creatures streaming through.  An unknown organization sends in a cyborg soldier to survey the damage and clean up the mess.

This is actually the third in a trilogy of overhead action titles named Ikari no Yousai in Japan.  In the US we only saw two such releases with all connections removed.  Fortified Zone was the first in the series and an early Gameboy release and pretty unique for its time as it was an original IP and not a port.  For reasons unknown its sequel remained a Japanese exclusive with OLB picking up the slack.

As the lone soldier called in to wreck shop and save the scientist you start the game with little more than the shirt on your back.  During the course of the game however eventually you’ll come across three extra weapons that can be switched on the fly and a few special items that will aid in your progress.  Each weapon has its strengths and weaknesses but most importantly they never become obsolete.  Some enemies and bosses are immune to specific armaments so you would do well to become familiar with your armaments.

The Straight arrow is a rapid fire machine gun and the default weapon that doesn’t excel in any one category but does have the longest range.  The spread eagle offers a wider range but suffers from the shortest range.  The R-laser is the weakest but can bounce off walls like its name suggests.  The Firebug is the most powerful and versatile as its flames will wrap around corners and objects to an extent.  2 additional items make an appearance toward the end of the game; the Decoy unit creates a transparent clone to fool enemies in your stead and the claymore is….a claymore mine.  Search hard enough and you might find one more weapon although it isn’t better than the flamethrower.

Operation Logic Bomb is a top down shooter first and foremost but that label is only part of the overall picture.  It has many commonalities with games like Zelda and Metroid, albeit in a condensed form.  As you explore the many sectors of the lab you’ll come across data terminals that need to be destroyed to restore the area to its original form.  Sometimes access to these terminals is barred until you’ve cleared a given room of enemies. Other times you’ll need a particular weapon to destroy them such as bouncing the R-laser off the walls of a small crevice, prompting you to leave it for later like in Metroid.

Each “level” isn’t all that large but you will have to navigate warp tiles to get around.  It’s pretty straightforward with very few opportunities to branch off and explore side areas until you’ve restored a given location completely before moving on.  Overall the difficulty rests on the easy side despite only one life and three continues.  Your life bar is pretty long and there are terminals scattered about that will refill it after every boss fight.  Even the few boss battles don’t offer up much of a challenge as they’ll go down in seconds with the right weapon.

The game’s lack of challenge exposes its one critical flaw, its brevity.  The game is criminally short and can be completed in as little as an hour once you’ve memorized the maps of each area.  Because the game is so short it never truly allows you to exploit your arsenal of weapon creatively.  The few times you use the R-laser to destroy distant memory banks or the decoy unit to trick an energy shield into exposing its prize are awesome but these moments are few in number.  If the game were longer it would have given its features room to grow and truly been excellent.

Most top down shooters from the 16-bit era weren’t anything to write home about however Operation Logic Bomb has its moments.  The cold metal sci-fi hallways and corridors exhibit a great deal of variety all things considered and the encroaching virtual elements laid on top of the environments are used to pretty good effect.  The few outdoor areas are a bit lacking but they at least provide a reprieve from the strict indoor setting.  The atmospheric music is pretty catchy and has a similar vibe to the OST of the Rushing Beat series; probably the same composer.

If only there were more content.  Operation Logic Bomb is one of the better top down shooters for the SNES alongside Super Smash TV and Pocky & Rocky.  The genre wasn’t so stacked in that era so it’s always nice to see that the offerings are of a high quality.