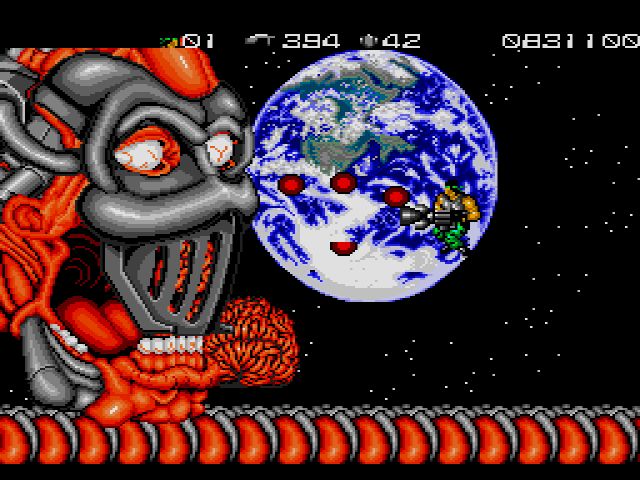 Looking back on the Genesis library there were shooters of all sorts from the overhead, vertical and horizontal kind.  One lacking omission is the side scrolling shooter a la Contra.  Contra would eventually grace the system in 1994 but there was very little else aside from the legendary Gunstar Heroes and Ranger-X in those early years.  Data East is certainly not the first name that I think of when it came to style action games but apparently Sega thought they were good enough when they released a port of their arcade hit Midnight Resistance.  It aimed to fill that void but was strictly average and merely reminded gamers of the title they really wanted.

Though it isn’t expressly stated Midnight Resistance is essentially a sequel to Heavy Barrel.  Except now the action has been flipped on its axis.  The Crimson King is the mad dictator who rules the world in the distant future with his Crimson Corps.  The only ones who oppose him are the resistance which you are a part of.  King Crimson has kidnapped your relatives and it’s up to you and a friend to rescue them.

Midnight Resistance wants to be Contra so bad it hurts and I don’t just mean the viewpoint and the similarities between their protagonists.  The weapon selection has been lifted wholesale with the machine gun, 3-Way gun, Fire, and Shotgun making an appearance (they get a pass on that last one).  They do get a point for including the super charger which boosts the power of your current weapon.  In addition there are optional smart bombs such as the nitro, shower and homing missiles, and an optional shield.

Despite these surface parallels there are differences that have an impact on gameplay.  Weapons have ammo and once depleted you default back to the machine gun.  You won’t find new armaments lying about but instead are “bought” in between levels using keys.  These keys are one of the few elements carried over from Heavy Barrel and like that game are dropped by red soldiers.  The selection available changes from level to level and once you choose a given weapon and leave you are stuck with it until the next stage.

Aside from its weapon system the game’s controls are definitely a departure from the norm and at least in my opinion felt awkward all the way to the end.  The arcade unit used a rotary joystick to enable firing in 8 directions.  The console version has four control schemes that attempt to emulate this in different ways, some more successful than others.  The default setup allows you to lock your fire in one direction and keep moving and is the closest you’ll get to a Contra style setup.  The other three use the B button to rotate the gun clockwise and counterclockwise or alternate between the two; in a game of this type that relies on twitch reflexes these options are too slow to be effective.

If you manage to adapt there are still a few more quirks you’ll have to deal with.  Regardless of the setup chosen you’ll have to get used to toggling auto fire on and off; there is no option to fire manually.  Not everyone will be a fan of it and it causes further problems with wasting of resources.  You’ll waste plenty of ammo by forgetting to turn it off although admittedly you have so much that it’s not much of an issue.  To use a smart bomb you press up and fire but since you attack whenever you aim upward to hit flying enemies you’ll always use a grenade.  It’s really stupid and could and should have been redesigned.

The nine levels in the game are less full length stages and more like brief action set pieces leaving the game a pretty short affair.  Each stage lasts a scant few minutes with a few minor enemies before facing off against one or two bosses.  Technically this is a side-scroller but oddly most levels simply slide out background elements for you to face or move on.  There’s a sci-fi bent to the game that gets stronger the deeper you progress and by the late stages of the game it gets downright weird.  Granted this is supposed to be the future but fighting giant clocks, floating heads that spit out brains, and mannequins is not what I imagined after watching Total Recall.

Midnight Resistance was ported to a variety of formats with the Genesis version being the closest to the arcade outside of the missing coop.  Overall it retains about 80% of the arcade game’s detail but the reduced color palette causing the few omissions to stand out.  The cool multiscrolling backgrounds of the first level are missing as well as level two’s forest.  The music is actually pretty damn good which is surprising as the rest of the game is only slightly above average.

While MR is an excellent port it’s also irrelevant as the game wasn’t anything special in the arcade.  It filled a niche in the system’s library early on however higher quality titles would soon follow making a purchase suspect.