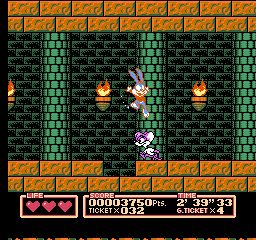 While there were many truly spectacular NES titles released in its waning days not every game was a lost classic.  The original Tiny Toons Adventures was a fun if average platformer that could just as easily have been any other game outside of its license.  Whether they were trying to squeeze as much as possible out of their license or genuinely wanted to create a sequel Konami took a different tact for this game, turning it into a series of minigames rather than a straight platformer.  If the game were a little meatier it could have been special but as is it is too brief to warrant a purchase.

Buster and his friends receive an invitation to the newly opened Fun House at Acme Acres theme park from a “secret” admirer.  But things aren’t as easy as they seem.  Before they can get in they must collect 4 golden tickets to gain entrance and find out who has been watching them from afar.

The object of the game this time around is to collect tickets, both normal and gold.  Regular tickets are used to play each “ride” at the park with different amounts necessary for each.  Gold tickets are awarded after you’ve completed each of the four main attractions or accrue fifty normal tickets.  Although each game costs tickets you can earn more by trading in your points at the ticket booth.  In a sense the game you are free to play the game however you like; if you find the bumper cars easier to deal with you can simply do that over and over, especially as it’s the cheapest.

More of the Tiny Toons cast has been brought in as active participants rather than side characters or in adversarial roles.  Hampton, Babs Bunny, Plucky Duck, and Furball each have their own individual game to complete at the park with Buster taking over for the finale in the Fun House.  This is not a straight platformer like the original; in fact only Hampton’s train ride and the Fun House qualify.  Aside from the train ride Babs has to survive a roller coaster ride from hell, Furball must endure a log ride, and Plucky must knock the rats from Perfecto Prep (watch the episode the Acme Bowl, it’s awesome) in a game of Bumper Cars.

For the most part the controls are solid all-around which you’ll need as the challenge varies wildly from game to the next.    The most difficult is the roller coaster.  For a game that seems to be aimed at children this segment is far too heavy on rote memorization like Battletoads for success.  There’s nothing wrong with that type of approach so long as you are given the tools to succeed, in this case time.  The coaster varies its pace randomly with the most perilous sections moving so fast that you have literally a second to decide if you should jump, duck, or flip it upside down to avoid damage.   It’s a pretty long level that you’ll have to try multiple times to complete and unfortunately you’re better off spending your tickets elsewhere.  This in stark contrast with Furball’s log ride which follows the same basic premise but is far more measured in its pacing and therefore more fun.

The bumper cars are equal parts fun and frustrating.  Its split into three rounds with the layout changing each time with the object being to send your opponent hurtling into the hole.  You can brake to reduce speed and charge up to go rocketing forward.  Due to the placement of the various bumpers and springs the enclosed spaces it takes place in will leave you rebounding uncontrollably most of the time.  Usually sending your opponents into the hole feels random, not that I would complain about success.  It isn’t outright terrible, just weird.

The sole platforming stages of the game are the most solid.  It really shouldn’t come as a surprise as they follow the framework of the first game.  But as fun as they are it’s not enough to salvage the game’s major critical flaw, its brevity.  With just five “levels” in total it’s possible to complete the game in under an hour with no reason to bother to go back.  It’s fun but it isn’t that fun.

Tiny Toons Adventures 2: Trouble in Wackyland made strides to use its license to separate it from the glut of platformers available for the NES and in that regard it is successful.  However it isn’t compelling with enough content to warrant tracking down.