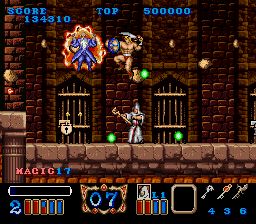 You know for as much as I liked arcade games during the 80s and 90s looking back I realize I pissed away a ton of money on games that were gigantic money sinks.  I’m not complaining of course; I enjoyed nearly every quarter I sunk into Teenage Mutant Ninja Turtles and Black Tiger (a game I prayed would see an NES port, alas) but there were some games that you would have needed a job to complete due to their design and Magic Sword is one of those games.  Its SNES port is flawed and exposes some of the game’s shortcomings but as a whole I can’t help but still like the game.

The dark lord Drokmar has come into possession of the Black Orb, an artifact that will give him the power to rule the world.  As the Brave One it is up to you to scale the 51 floors of his Dragon’s Tower to put a stop to his plans.

He’s certainly brave to tackle such a monumental challenge with nothing more than a sword and shield.  Your sword attacks have a charge meter that refills after each attack and once full will produce different results based on your current weapon, hence the Magic Sword in the title.  During the course of the game as you defeat each of the eight bosses you are rewarded with a more powerful sword such as the Flame Sword and Sword of Thunder.

Aside from weapons every level is littered with treasure chests full of items.  Seriously it’s a bit overkill just how many there are on any given level that lasts less than a full minute.  Coins are simply for points, the numerous food items will restore your health, and there are various artifacts that grant boons or bonuses such as increased/reduced attack power, faster recharge time, etc.  There are just as many trap chests the higher you ascend, which will spawn monsters, erupting flames, or even drop boulders on your head.  The most common items you’ll receive however will be keys which are used to open the cells where your allies are trapped.

50 floors is a lot to tackle alone, especially since two-player coop is missing and that’s where the optional companions come in.  Though not named the eight potential sidekicks you can have assist comprise different character classes in the Dungeon & Dragons mold and have their own life bar and powers that increase as they level up.  The Amazon is fast but weak, the Caveman is strong but slow while the Knight is a middle ground between the two.  The Ninja is similar to the Amazon except his throwing stars ricochet off walls.  The Priest is useful against undead enemies and can protect himself with a barrier.  Two of the eight require special items to recruit but prove worth it.  The Lizardman resides higher in the Tower and is the most powerful.  The Thief isn’t anything special in terms of power but can detect traps and hidden chests.  Only one can follow you at a time but there are so many cells you’ll have plenty of chances to switch if need be although it sucks not knowing who you’ll get beforehand.

The game might seem long since technically there are fifty levels but in actuality it’s of medium length.  There are many floors that are cleared in as little as thirty seconds, sometimes in rapid succession.  At times there are multiple exits and if you have the thief you can find hidden doors that will allow you to skip certain floors.  For the home version you have the option to start the game at several different floors all the way up to floor 33, significantly cutting down the time needed to scale the Tower.

It’s a wise addition to the game as it does become boring quickly.  The home port loses some of the arcade’s enemies and so you’ll face the same 3-4 bad guys in every level which gets old fast.  Some of the backgrounds and stage themes also tend to repeat themselves far too often.  The game would have been better served with less floors if it would have led to more variety.  Around every eight floors you’ll face a massive boss which does break up the monotony as they prove suitably challenging to defeat.

This is definitely an arcade game down to its roots, a fact born out through its challenge and set up.  You are only given two lives and three continues to complete the game which is a bit unfair.  The cheap hits from enemies and traps come frequently and the game is stingy with food.  Boss fights tend to drag on since they have huge life bars and inflict massive damage with each hit.  It’s a tactic that made sense in the arcade to make you spend more money but doesn’t hold weight at home.  They were willing to cut down on the repetition by letting you start higher in the tower, why not make a few adjustments to the gameplay?

For the most part this SNES incarnation is faithful to the arcade.  Most of the sprites have made it over intact and the backgrounds have only suffered a minimal loss of detail.  Capcom’s art helped make the game stand out from other fantasy games at the time and the SNES color palette does it justice.  In motion however you’ll see why the multiplayer was excised.  There’s a ton of slowdown at every turn as soon as three or more sprites fill the screen which is a regular occurrence.  It’s understandable since this was a first generation SNES title but still disappointing.

Slowdown aside the flaws in gameplay also exist in the arcade game so you can’t fault Capcom for producing an accurate port.  Though it has a few rough patches I can still enjoy Magic Sword and recommend it to hack and slash fans.