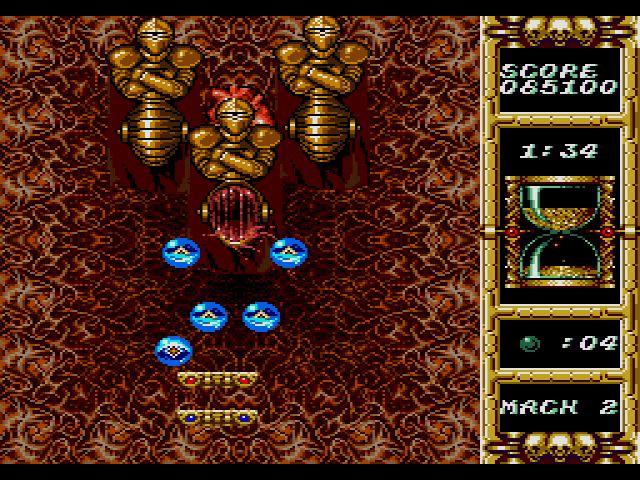 I’ll be the first to admit that while I respect videogame history I have absolutely no interest in bothering to replay almost any pre NES era games.  There are very few exceptions to this of course such as Pitfall, Demon Attack, and most importantly Breakout.  I hold Breakout in the same esteem as Tetris and so any title that takes a stab at advancing that formula will get my attention, such as Arkanoid and the awesome Dreamcast import Cosmic Smash.  In the early 90s Devilish attempted to meld a story with the same classic gameplay of Atari’s hit and created a title that was interesting to say the least.  Nowadays indie developers have created a ton of variations on this popular formula but Devilish was one of the first and isn’t all too successful at what it attempts.

As far as the plot is concerned they really shouldn’t have bothered.  A prince and princess who are madly in love are turned into a set of paddles by a jealous demon named Y. By chance the two come across a ball that they can use in their new forms to defeat the demons that have taken over their kingdom.  I swear I did not make any of that up.

Nonsensical story aside it does serve to highlight the major difference in gameplay between most of the Breakout clones of the day.  Rather than a single paddle you use two at the same time.  The two paddles both move in unison however you can manipulate the top paddle in a number of different ways.  It can be arranged to create formations such as an L shape to better direct the ball when necessary.  It’s an important feature since the levels scroll both vertically and horizontally; if you solely rely on the ball’s momentum for progress you’ll never beat the clock.

You can also freely move the top paddle around the screen while its lower cousin follows your movements.  There are numerous obstacles and traps that need to be destroyed and positioning the paddle right underneath these will help destroy them faster.  The ability to fly around the screen and guide the ball’s movements almost breaks the game in my opinion.  On the one hand it’s kind of necessary due to the game’s bad physics (more on that in a bit) and the layout of each level.  But dealing with the ball’s momentum and random movements is part of what makes Breakout and its ilk so fun.  By removing that you are left with a game that is far easier than it should be due to these gameplay additions.

Giving full control of the paddle probably seemed like a cool idea at the time and could have worked but I also think it was done to cover up the game’s terrible ball physics.  Each level is made up of multiple smaller sections that must be cleared to progress giving the game the feel of a scrolling platformer.  In truth if you were to view them all sequentially without any breaks you would see that in actuality each level is quite small for a number of reasons.  All objects on the playing field are large; so large that there is very little room for the ball to rebound around the screen.  There are so many blocks, monsters, and traps that are scattered around the screen that you can’t reliably tell where the hell the ball will actually go.  You can alter the ball’s speed with three settings but that does little to alleviate this.  There’s also some spotty collision detection which will lead to some cheap deaths which for a game of this type is the kiss of death.

It isn’t a complete wash however but it does mar the gameplay which sucks because the rest of the game is so good.  Each level is themed and has numerous obstacles to contend with such as rocks, demons and gates that need to be destroyed.  There are random blocks that will disable one of your paddles, forcing you to rely on the other for a brief time.  Traps have to be navigated properly lest you lose a life such as the massive rotating gears of the Clocktower or statues that will gobble you up and spit you back out randomly.  Later levels introduce tougher materials that can withstand more than one hit such as different metals and massive demons that serve as walls to be taken down.  At the end of each level lies a massive boss that while looking cool don’t offer up much in the way of resistance.

The game’s art direction is a far cry from the staid brick tiles and flat background of the game that inspired it.  The fantasy kingdom in which the game takes place serves as ample fodder for some creative settings.  Each stage is themed such as the Clocktower, Seaside and Waterfall and generally stick to it down to the types of enemies and obstacles you’ll face.  The soundtrack is also fantastic; Hitoshi Sakimoto is one of the most well regarded composers in the industry and makes the Genesis hardware sing with his music tracks.

There are some good ideas underneath a layer of shoddy execution and it’s up to you as to whether or not the game’s problems are deal breakers.  As much as I want to recommend Devilish I can’t do so without some reservations.