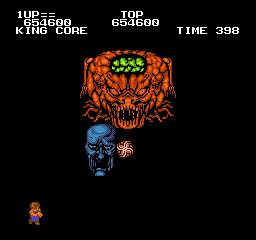 Somehow even as a child I knew about platform exclusivity although I’m sure I never used that phrase.  As one of the lucky few who got to play the Sega Master system on a regular basis I knew that Sega games would never appear on a Nintendo platform and vice versa.  Fast forward about 15 years later and that one sacred truth would be shattered but it actually happened even sooner than that thanks to Tengen.  Tengen published a few ports of some of Sega’s best arcade titles for the NES and while Afterburner suffered in the translation Alien Syndrome turned out pretty damn nice and was far better than its Master System counterpart.

Very little was done to hide Alien Syndrome’s obvious Alien inspired roots.  Our two protagonists resemble both Sigourney Weaver and Michael Biehn and the plot is similar.  Aliens have infested various Earth colonies and trapped the humans inside, prompting Earth to send in Ricky and Mary to rescue as many survivors as possible.  As insurance that the threat is neutralized each installation is set to blow whether you are successful or not.

Although it shares the same viewpoint as other overhead shooters such as Commando and Heavy Barrel this is closer in style to Gauntlet.  Unlike the arcade game the goal here is to save all twelve hostages rather than a set number per level.  Once that is accomplished you must find the exit before time runs out and defeat the mother alien barring your escape.

New weapons are few in number and scattered around each colony.  All three seem to deal the same amount of damage but make up for it in functionality.  The laser will pierce multiple enemies in a row but has the slowest firing speed.  It works great for your typical mutants but its lack of speed makes boss battles a grueling process since you need to hit specific body parts.  The flamethrower

With the entirety of each colony open to exploration it’s up to you to plot out the best route to finding the prisoners in as little time possible.  Compared to the coin op the levels are more compact and not as confusing in their layout but there are still points late in the game where you’ll constantly refer back to the map.  Speaking of, scattering multiple maps around the levels is a smart decision rather than forcing players to backtrack to one location.  It makes tracking your progress simpler rather than drawing your own maps.

The difficulty curve is near perfect in my opinion as the early colonies are simple enough in their design that you’ll have plenty of time to spare even if you dick around.  By the third colony the layouts become more complex and enemies are more aggressive in following you and actually attacking.  There were more than a few times where I barely made it to the exit with about 20 seconds left on the clock.  Even with the ramp up in challenge the game still feels easy, especially since all enemies die in one shot.

The only real challenge comes from the bosses.  Here it seems as though your dude is a gimpy moron in comparison to the speedy monstrosities you face.  They move relatively fast considering their size and have very specific weakpoints that are hard to target depending on your weapon.  Whatever time you have left once you reach them is added to the clock during each boss battle and it’s possible that it won’t be enough if you have terrible aim.  They sure do look cool though.

As much as I do like the game I will admit that it’s pacing could have used a shot of adrenaline.  Your walking speed is slow and hoofing it from one end of each compound to the other is a long, laborious process with very little to keep you engaged.  Enemies rarely attack in groups larger than three and you can out run (if you’ve played the game you’re aware how silly that sounds) them if it becomes too dangerous.  They could have upped the speed a smidge without breaking the tension of the clock ticking down in my eyes and created a more interesting and diverse set of aliens to fight.

They’ve done a fairly decent job of stuffing the arcade experience into an NES cart but the downgrades are definitely noticeable.  Most levels use a duo tone color scheme that is pretty ugly.  The sprites are smaller but the game’s credit there’s also no flickering or slowdown.  It doesn’t hold a candle to the Master system version but that game was set up more like Zelda and is completely different.  The music is also unremarkable and forgettable as are the sound effects; presentation clearly isn’t this game’s strong suit.

Even with its pacing issues and general lack of excitement Alien Syndrome is still a solid game.  It’s certainly turned out better than Shinobi and Altered Beast that’s for damn sure.