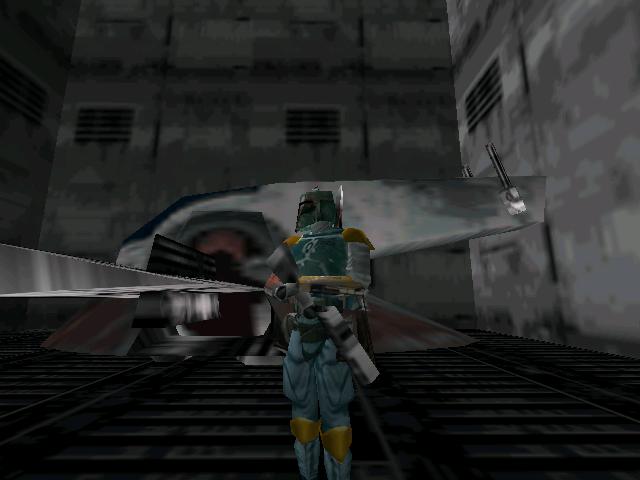 The Star Wars franchise has always enjoyed a fruitful relationship with Nintendo consoles, dating as far back as the NES.  The Star Wars trilogy of platformers on the SNES were all high quality games so it came as no surprise when LucasArts announced a new game in the series for the unreleased N64.  Heads turned however when it when it was announced as a prequel that takes place in between the Empire Strikes Back and Return of the Jedi.  This was the first major project in the Star Wars timeline outside of the novels since ROTJ, with the game serving as the spearhead of a multimedia blitz, and while decent fails to live up to its potential.

Star Wars: Shadow of the Empire was released in December 1996 for North America, one of only 8 games available for the system that Christmas.   You star as Dash Rendar, a Han Soloish smuggler and mercenary as he runs afoul of Prince Xizor and his Black Sun syndicate as they makes moves to replace Vader as the Emperor’s right hand.  Many of the events in Shadows of the Empire weave in and out of the important moments of the 2 films only told from Dash’s perspective.  For the most part they coincide cleanly but there are a few contradictions.   Shadows of the Empire was certainly an ambitious project and at its best moments lives up to its promises of action heavy adventure.  However the entire experience is brought down by problems that could have, no should have been stamped out prior to its release.

Through 10 levels you are taken on a rollercoaster ride of set pieces, many of which are lifted from the films.  The opening level revisits the Battle of Hoth, and as the first truly 3d representation sets the bar high.   Roping At-AT’s never gets old, don’t let anyone lie to you.  3 more vehicle levels round out the package, riding Speeder Bikes in Mos Eisley and Beggar’s Canyon, and piloting the Outrider to destroy Xizor’s Skyhook palace.  These levels largely escape many of the game’s control issues but I’ll get to that soon enough.  The rest of the levels consist of third person (or optional first person) segments as you explore the levels to complete objectives and defeat bosses.  These should have been the highlight of the game; instead they are where the game’s flaws are most prevalent.

The most glaring flaw is the controls.  The best third person games all give a sense of weight to your character.  Mario, Sonic, the list goes on.  Dash Rendar is floaty, unresponsive, and all around slippery.  The 4 camera options are serviceable at best, with first person the most “workable”.  Unfortunately there are many platforming sequences and judging distances when you can’t see your own feet is a nightmare, forcing you to switch back and forth.  The best way to describe the third view is that the camera is stuck to your back, and it gives a feeling of sliding through the environments rather than moving through them The movie angle option is exceedingly stupid; who the hell wants to try to control the game with the camera switching every few steps with your controls following suit?  This was an early symptom of developers experimenting in the move to 3d and I’m glad no one else followed suit.

Beyond the controls the levels are pretty poor.  When the game has you participating in events from the movies everything is fine, such as the Battle of Hoth or fighting Bobba Fett.  It’s the original levels that suffer from too much ambition.  The levels are massive but also empty with far too many long stretches with no enemies to fight and few items to pick up.  To increase the scope without creating new assets they simply recycled the same geometry, so you’ll end up seeing the exact same corridors and caves as many as 7-8 times in the same level.  Most of the boss fights can be beaten by circle strafing but good luck accomplishing that with the terrible controls.  The challenge points you can find are well hidden and unlock cheats depending on the difficulty level; that’s about the only reason to explore the stages.

For its time Shadows of the Empire was pretty amazing graphically.  The scale is impressive and everything is detailed to a level few games attempted back then if slightly blurry.  They are just good enough to envelop you in whatever scenario the game throws at you if highly repetitive but there are some standouts.  Sequences such as leaping from train to train in the Ord Mantell junkyard are exactly what we were promised and deliver in spades, graphically and aurally.  Speaking of the music, it’s excellent.  The N64 was highly criticized (and rightly so) because of its lack of sound chip and most games showed this flaw with terrible, terrible music.  Lucas Arts managed to squeeze lots of digitized music into the game, with new music by Joel McNeely blending with the familiar John Williams score from the movie.  The strong compositions are let down by the fact that each track isn’t long and loops heavily.  But it’s a far cry from the piss poor music of Pilotwings 64 that’s for sure.

Maybe if the first level had not set the bar so high the rest of the game would not stand out for its mediocrity.   But that would not change the fact that Shadows of the Empire does not live up to the hype.  Allegedly Shigeru Miyamoto sent a list of fixes to Lucas Arts which they only half implemented.  Whether this is true or false the fact remains that Lucas Arts could have and should have done better.