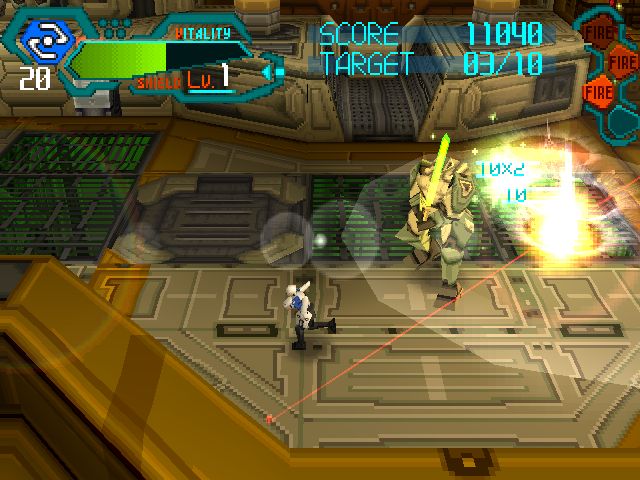 Who remembers Bomberman Act Zero?  I’m sure Konami/Hudson wishes everyone would forget but it stands as a perfect example of how not to update a franchise for modern audiences.  With its dude bro look and sterilized graphic style it pandered to the American audience but everyone was far too smart to fall for it.  There was nothing wrong with the sentiment behind its creation, just its execution.  The sad thing is all Hudson needed to do was look to an overlooked gem on the PlayStation for a proper representation of Bomberman’s gameplay in 3d as I feel Silent Bomber is everything Bomberman Act Zero tried to be.

You are Jutah, a war criminal and soldier tortured by his past.  Largely devoid of any emotion Jutah is the perfect soldier as he doesn’t question orders.   The mission he is enlisted for is the destruction of the space station Dante which is threatening his home planet.  Although he is part of a team they are all separated, leaving Jutah in your (hopefully) capable hands to fulfill the mission.

With its emphasis on placing charged bombs as your means of offense Silent Bomber is not your typical action game.  While you would think the means of attack would result in slow paced combat that is not the case; Silent Bomber moves at a brisk pace and is backed up with solid controls that are adequate to the task.  There were numerous Bomberman games on the N64 that moved the series away from its strictly Pac Man style mazes however Silent Bomber does a better job of taking that series mechanics and marrying them with a solid platformer.   Silent Bomber was criminally overlooked back in the day but I’m here now to shine a light on this excellent action romp.

If you’ve played any version of Bomberman than Silent Bomber’s mechanics should be familiar.  You attack by setting bombs and then detonating them remotely.  These bombs can be set at your feet or by holding the button and bringing up the reticule you can lock onto a target and home in on it.  Locking on isn’t necessary either, once brought up you can launch bombs in the direction you are facing.  The fun comes from using your “powers” in unique ways to overcome your obstacles.  Bombs can be stacked to create bigger, more powerful explosions and can also set each other off.  It’s possible to create large daisy chain explosions that practically ignite the entire play area if you choose to be that reckless.  You’re not immune to the explosions but luckily you are equipped with a nifty Buster Drive to escape tricky situations.

Initially you’ll start off weak but can enhance your skills after every level with E-Chips in 3 categories: number of bombs you can set, distance, and defense.  Near the end of the game you’ll be able to unleash up to 8 bombs from a relatively large distance.  The 3 liquids you collect also complement the core bombing mechanic pretty well.  Napalm isn’t that different from your typical bomb but causes lingering fire damage, Paralysis liquid paralyzes (come on!) enemies, and gravity gel creates an awesome black hole that causes mass destruction.  It’s not a large arsenal but once you’ve had a little practice with the game’s mechanics you’ll feel like a one man army.

With 14 missions Silent Bomber is pretty long and has a wide variety of mission objectives to stave boredom.  The mission’s will have you performing an array of tasks, from blowing up a set number of targets to protecting an envoy.  Very few levels share the same objective and despite the game taking place exclusively on a space station it does a good job of varying the locations.  And the game puts up a nice challenge.  You won’t finish this in one or two sittings but you’ll definitely have fun while exploring its mechanics.  Large portions of the environment are destructible and you’ll discover many hidden items by accident as you simply blow shit up.  Adapting to dropping bombs or launching them will force you to think creatively and its always satisfying when a chain reaction is created whether by skill or happenstance.  The game pumps out an infinite number of enemies in most areas so you’ll have plenty of practice learning to effective clear the screen in as little time.   All of the wanton destruction does serve a purpose as you are graded at the end of each level and rewarded accordingly.   Your score is affected by numerous factors, such as enemies killed, objects destroyed and taking little damage.

For those that want more depth there are plenty of advanced techniques to master, such as wall jumping, explosion jumping, and combining liquids with your own bombs for added effects.  The game rewards those who take the time to learn its mechanics by awarding more E-chips for customization and unlocking Advanced Mode.  Here you are dropped into a mission of your choosing to complete as fast as possible and can snag Data chips that unlock new characters in the VR Arena.   As if the main game weren’t enough fun the arena allows you to fight the computer or another player using unlocked characters and is a true test of how well you’ve learned all it has to offer.

It isn’t too surprising that Silent Bomber flew under the radar of many.  It didn’t receive much of a marketing push and there’s also the fact that Bandai has pushed out a lot of crap in their time (they’re kind of the Acclaim of Japan).  However!  This is one of the few cases where an otherwise terrible publisher did us a solid and released a quality game most should not have passed over.   For those that like a good action shooter I highly recommend Silent Bomber.