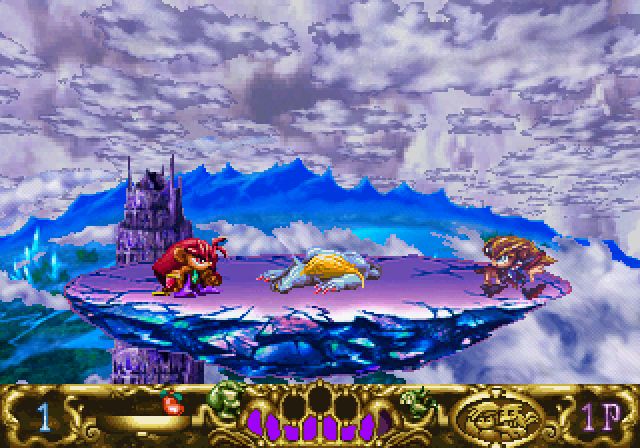 At the end of the 16-bit era the platformer had been perfected.  With nearly the entire industry cranking them out for the better part of a decade the mechanics typical of the genre were honed to perfection and gamers were treated to some of the finest games ever made such as Donkey Kong Country 2, Yoshi’s Island, Vectorman, and Sonic & Knuckles.  So it stands to reason that most of us expected that legacy of excellence to continue on the 32-bit platforms; boy were we naïve.  I won’t go into a rant about how terrible many of those early 3-d games were; I’ll just say that it made us appreciate the rare 2-d platformer like Astal more than ever when they were able to escape the cell the industry decided to box them in all in the name of progress.

The Goddess Antowa created the world out of a jewel, including the sky, earth, sea, and air.  To inhabit the planet she created two humans, Leda from a green jewel, and Astal from a red jewel.  Astal was created to protect Leda while the goddess slept, a job he seemed a little too eager to fulfill.  When the evil Jerado and his creation Geist kidnap Leda Astal nearly ruins the world in anger and is imprisoned on the moon.  Although Jerado is dealt with Geist is still alive and kidnaps Leda once again.  Astal breaks free to save her once again.

We should have gotten more of these damn it!

Astal was a victim of circumstance.  Sega’s decision to release the Saturn early without telling retailers meant it wasn’t well stocked.  The industry had begun its infatuation with 3-d and Astal’s beautiful 2-d art was seen as antiquated by many in the press although it still received positive reviews.  And that box art sure as hell did no favors.  However despite all of these factors Astal is a lost gem from that era and while it isn’t on the same level as the classics I mentioned previously it did offer a tantalizing glimpse as to what was possible with the new hardware.

Astal has a simple set of play mechanics.  He’s strong as hell and can thump anything in his path or throw it away, whether its enemies, trees, or boulders.  With his strength he can pound the ground, stunning most enemies for a second, even bosses.  And like Superman he can inhale and unleash his super breath.  After the first level your bird companion can be used to attack all enemies on screen or retrieve health items in a pinch.  As a nice bonus a second player can control the bird and he is armed with a nice suite of abilities although I doubt this feature saw much use.

The implementation and use of Astal’s powers are what makes the game so fun.  The pace is noticeably slower than most platformers but it doesn’t impact the action.  Although the levels are short there are enough of them that you get to exploit each of Astal’s abilities.  Entire levels are built around his powers, such as the River of Dreams, where pounding on the dragon will propel you in the air and is crucial to avoiding the spikes in your path.  Or Volanic Valley, where blowing out the flames is necessary for progress as well as defeating the fire dragon at the end.  Boss battles will challenge you to pay attention to animation cycles and use your powers in unexpected ways in order to win.

At 16 levels or so there is enough content to last quite a few hours but the game is kind of short overall.  Each level is only a few minutes long and once you’ve figured out the hook for certain stages it becomes a breeze.  Astal is not a hard game by any stretch although it can be tricky at times.  Most of these problems stem from the wonky hit detection which seems to conk out at the worst moments.  It isn’t so bad that it ruins the game but it is enough of a problem that I would be remiss if I did not mention it.

You only need to glance at a few screenshots to know that Astal is a beautiful game.  The crystal theme makes for some mesmerizing set pieces and the overall artistic direction is a literal explosion of color in your face.  It’s almost as though Sega was over compensating for the Genesis’ lack of expertise in that area. Whatever the reason Astal is a perfect example of why the Saturn was built to be a 2d powerhouse.  While the music is similarly excellent the same cannot be said of the voice acting, which is flat out bad.  The cutscenes scattered throughout the game are painful to listen to due to this.

It’s a god damn shame we didn’t receive more 2d goodness on the same level throughout that console generation.  It would have served as a counter balance to all of the terrible 3d games most developers crapped out however it did make us appreciate them even more whenever they were released.  Astal isn’t rare but it isn’t readily available in heavy supply.  Regardless of how much you pay you are in for a treat.