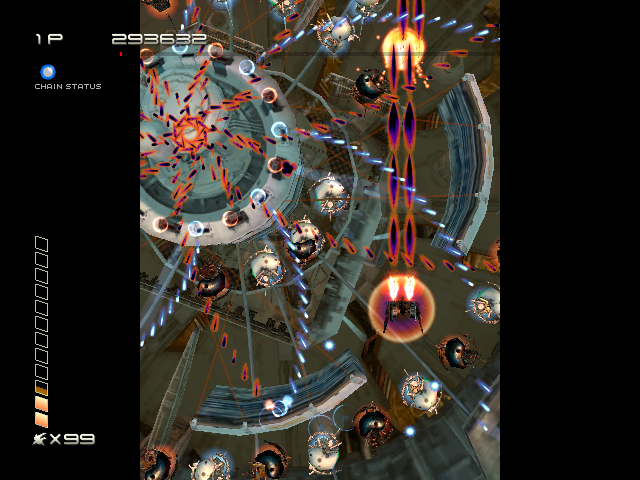 Developer Treasure were no strangers to the shmup genre, having released what many consider to be one of the finest shooters of all time, Radiant Silvergun for the Saturn and arcade.  Sadly it never saw the light of day in the US until its recent XBLA release but even a decade of time did nothing to tarnish its sheer polish and innovation.  When news of a sequel hit everyone took notice and then came the wait for a possible home port.  And Ikaruga lived up to the hype established by its prequel in every way.

There’s some semblance of a plot but I won’t bore you with it because it has no bearing on the gameplay whatsoever.  Originally released in the arcade Ikaruga was ported to the Dreamcast and then the GameCube the following year.  The polarity switching mechanic at the core of the game had been used in Treasure’s other Saturn (and later Playstation) release, Silhouette Mirage.  However I feel it was taken to its zenith with this release, creating one of the most brilliant and most of all fun shmups of all time.

The polarity system is the life blood of Ikaruga.  At the touch of a button you can change between light and dark polarity.  The benefits of each are the same and need to be juggled to truly be effective at the game.  Bullets of the same color can be absorbed to power your homing lasers while only bullets of opposing polarity can kill you.  Naturally attacking with the opposite polarity will yield the best results against all enemies, including the bosses.  It’s a simple system in practice but is executed in game brilliantly with many rewards for the players who truly maximize its potential.

All enemies come in one form of light and dark and in multiple waves.  The key to playing Ikaruga is to min/max how long you stay in one polarity long enough to soak in bullets and make use of your homing lasers, which I should add you don’t need to be stingy in its use.  There are many environmental hazards that spew massive bursts of energy you can simply sit in and absorb, filling the weapon meter in seconds.  At times Ikaruga will delve into bullet hell shooter madness but in this case you don’t have to learn the sweet spot to stay alive, you’ll spend more time examining how long you can stay light or dark before you have to switch.

The boss battles are the ultimate litmus test as to how well you’ve mastered the game’s mechanics.  These mechanical monstrosities will nearly cause you to drop the controller at the sight of their mad bullet patterns but those with a keen eye and fast reflexes will see the path to victory.  Most bosses telegraph their next move in advance and move slow enough that you have enough time to react.  At least in the first half of the game.  God be with you in the later chapters; I pray to God you’ve mastered the game’s nuances by then.

By chaining enemy kills in one polarity in groups of 3 consecutively your score multiplier is increased and is the key to earning extra lives frequently.  The levels are set up so that once you are good enough you can possibly chain a good quarter of a stage if you are careful and smart in pacing your kills.   Seriously there are some insane videos on youtube if you want to truly see just insane it gets at times.

At 5 Chapters Ikaruga isn’t long but you sure as hell will not finish it in one sitting.  Or even a few.  The challenge is not so high that it feels impossible; in fact it’s the opposite in many ways.  Whenever you die you’ll see exactly what you did wrong and how you can improve next time.  If the game itself were no fun most would simple play something else.  But the core concept that the game is built around is so fun to play around with that you can’t help but give it another try.

The GameCube version has a number of extra modes to ease players into the game.  The Trial mode has infinite lives but only consists of the first two chapters.  There’s a slow motion tutorial mode that goes in depth on the finer points of the game’s mechanics and most of all there’s a two player coop.  Maybe it’s just me being anti social but I don’t think I could ever trust another player to be on the same page as me in this game but I would love to see a full clear video of 2 player coop.

The art direction in Ikaruga is simply unparalleled in the genre.  With most of the primary illustrations and 3d objects designed by Sin and Punishment artist Yasushi Suzuki it’s to be expected.  Despite being an overhead shooter you’ve never seen a game quite like this.  The backgrounds shift perspective multiple times and the effect is beautiful.  The mechanical designs in the game are second to none, especially the multi-jointed bosses.  While the game can be a bit drab color wise every chapter has a specific theme that breaks the monotony.  Simply put there are very few shooters that match up to Ikaruga visually.

What more needs to be said?  Hands down this is one of the best shmups ever created and anyone with even a passing interest in the genre needs to rush out and buy it as soon as possible.   The Dreamcast version was never released in the US and fetches high prices on Ebay.  The GameCube version did see a US release but isn’t too common.  However Ikaruga saw an X-Box Live Arcade release last year so now it is finally widely available to anyone interested.  This comes with one of my highest recommendations.