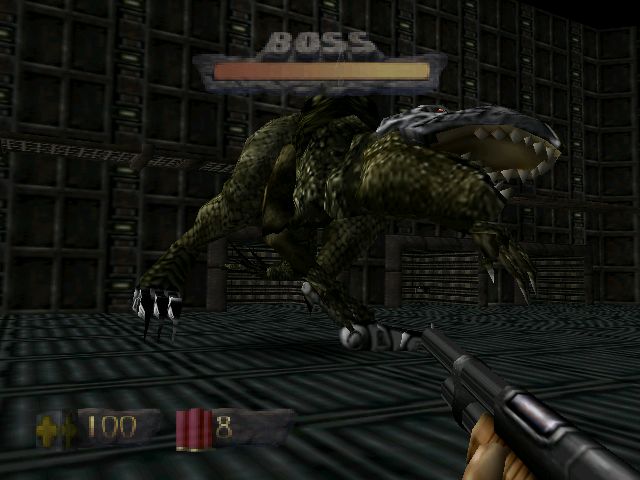 Turok: Dinosaur Hunter was on old comic’s property from the 1950s that I’m sure not many remembered until it was brought back by Valiant Comics in the 90s. However even with that resurgence in popularity for the character I was surprised Acclaim chose this to make a video game adaptation. Personally I would have picked Ninjak but that’s because I think ninjas are cool. I doubt many had high expectations of the game but the frequent previews painted a different picture as it was obvious Acclaim were putting more money into the project than their typical licensed products. It would ultimately prove to be a success and save the company. Turok was a landmark release in terms of console first person shooters but time has not been kind to the game as the advances within the genre make it hard to revisit.

As one of the earliest N64 titles the importance of Turok: Dinosaur Hunter’s release and success for Acclaim cannot be stated enough. Where they once were riding high off the back of successful arcade ports like Mortal Kombat 2 and NBA Jam their fortunes took a dark turn once Midway began handling those releases themselves. Combined with the significant failure of games such as Cutthroat Island and their backs were against the wall. That they pinned their hopes on such a relatively unknown (outside of serious comic book fans) property says a lot but the fact that the game was so successful and would spawn a long running franchise is even more incredible.

The most polarizing aspect of Turok has to be its controls. In the age before dual analog sticks there were many approaches taken at somehow replicating the speed and fluency of mouse and keyboard controls and in my opinion Turok does it wrong. Rather than using the analog stick for movement the game instead uses the C-buttons with the analog used for aiming. This is counter intuitive to how the vast majority of gamers have ever played games and even after sinking hours into the game it never felt natural. The only other option available is left hand controls which is sort of manageable as the d-pad controls movement but the C-buttons are used for aiming, which relegates all of the other functions to buttons in odd places. Neither one is ideal and if you can’t manage to find some way to adjust (which I’m sure most won’t) this game isn’t for you.

While the default setup is great for aiming this isn’t an action packed fps like Doom. Turok throws in adventure game elements as there is a heavy dose of platforming which unfortunately does not work within the context of this game. It works in games like Jumping Flash and especially Metroid Prime since the camera tilts to show the platform you’re about to land on. Here however the game frequently sees you balancing on the thinnest platforms in sequence with failure leading to retracing your steps. It is a little forgiving in that regard but the game would have been so much better if it dialed back on this element.

Outside of the frustrating platforming however this is as grand an adventure as you’ll encounter in a first person shooter. The levels are absolutely huge and packed full of secrets. The objective of each stage is to find the keys needed to unlock further stages in the game’s hub world as well as assemble the Chronoscepter.   After the initial jungle level the game is completely nonlinear, a fact you’ll appreciate since it is easy to become lost in any of the game’s gargantuan worlds. I’ve spent upwards of three hours or so exploring each level and while it does feel meandering at times due to their size the frequency of enemy encounters (at times a bit too much) means you won’t become bored.

The game’s title might give the impression that you’ll spend the majority of the time slaying ancient dinosaurs in the jungle but that couldn’t be farther from the truth. As you progress deeper into the game the forests and tribal huts give way to more alien environments with suitable enemies to match. That variety is the game’s greatest asset as you’ll face soldiers, tribal warriors, mutants, demons, and of course the dinosaurs in the game’s name. The weapons similarly become more over the top. The simple explosive Tek arrows will eventually give way to such outlandish weapons as the Quad Rocket Launcher and Fusion cannon, which is a small form nuke.

At the time of its release there were no other console games on the same level as Turok. The detail in the textures was simply superb, especially on the later bosses and the environments became more and more fantastical as the game progressed. The animation of the various enemies is also well done with a surprising number of unique death animations depending on where they were shot. Glorious arterial spray! The graphical splendor came at the cost of draw distance as the game made heavy use of fog and was rightfully made fun of for it. The fog really is that bad but it also kept the frame rate extremely high with the game only slowing down once 5 enemies were on screen which is a rare occurrence.

Turok: Dinosaur Hunter was at one point the most advanced console first person shooter and a game worthy of many of its praises. But the game’s faults such as its awkward controls and ill advised platforming were pretty significant back then and are even more pronounced now. I don’t know that I can completely recommend the game; there’s still plenty to like about it but the wonky control scheme is hard to go back to after experiencing the relative perfection of dual analog controls.