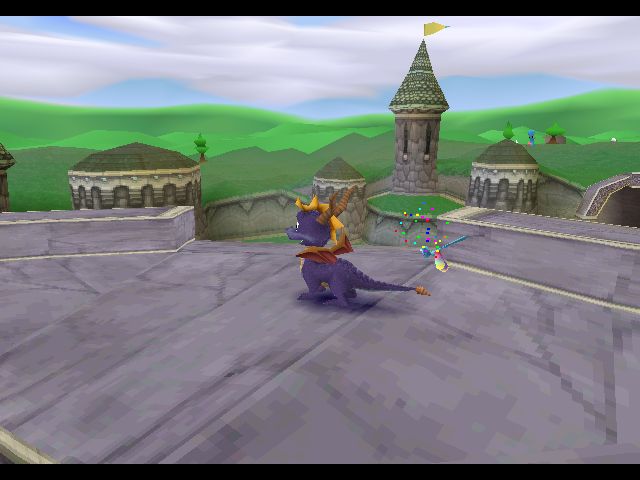 Spyro the Dragon was something of a landmark title for the PlayStation. For years it was assumed that the system was not capable of a free roaming 3d platformer like the Nintendo 64 was inundated with. While Crash Bandicoot might have been Sony’s franchise player in that battle it was confined to a straight path; a thoroughly beautiful path but still limited. So in that light you can look at Spyro as something of a statement about the system’s capabilities. That isn’t important however as above all else Spyro the Dragon is an excellent platformer that is still fun today.

The dragons of the various realms are celebrating their many years of peace and prosperity. When asked about Gnasty Gnorc, a fiend who was imprisoned long ago, they respond by calling him ugly and a non-threat. Unfortunately Gnorc just so happens to be watching and casts a spell that transforms all of the dragons to stone except for young Spyro, who is small enough to dodge the attack. Now it is up to the headstrong Spyro to save his friends and the Dragon World.

More so than anything else Spyro is a technical achievement. The use of simple textures and gouraud shading gives the game an insanely clean look and helps avoid the typical warping associated with so many PS One games. The lighting and draw distance are fantastic and the game has minimal loading time throughout. All dragons feature excellent facial animation and detail that was unnatural for that era. Although it was released in 1998 Spyro is still one of the strongest games graphically for the platform due to its engine and art direction. There’s an extensive amount of voice work throughout the game with the dragons of each world speaking with specific accents. Though it is easy to identify when certain actors are voicing more than one role the effort in variation supersedes that.

The controls are simple and intuitive with both a regular controller and a dual shock. Nearly every button is used but not necessary although it will make your life easier to become acclimated to their functions. Unlike most platformers the camera here is excellent and awards you full control; both L2 & R2 rotate the camera and triangle will immediately swing it behind your back. The only times it doesn’t obey are in tight spaces which is understandable and manageable. It’s a similar to Banjo Kazooie and largely sidesteps the problems that plagued most 3d platformers in that period.

Spyro has two attacks, a short burst of flame and charging with his horns. The game provides plenty of reasons to use both as there are plenty of enemies who are immune to either attack.   Though Spyro can’t fly he can glide short distances. A few more advanced techniques open up during the course of the game such as the super charge but for the most part the game keeps it pretty simple.

The Dragon World is broken down into 5 massive realms, each with portals that lead to different areas much like Mario 64’s paintings. Like nearly all platformers the game is basically a collectathon but thankfully keeps its various doodads light. Spyro’s dragon brethren need to be freed from their curse, gems need to be collected in massive quantities and there are 12 dragon eggs total that need to be retrieved. The game keeps track of your collectables via a handy subscreen. Primarily all of these are to meet specific requirements before you can move on to the next world. What’s cool is that you don’t need to collect everything in a given area and can leave as soon as the exit chamber has been found. Certain hard requirements such as retrieving five dragon eggs are a bit more hard capped but for the most part the game leaves allows you the freedom to progress at your own pace.

The various worlds you’ll visit present their own specific challenges. The Magic Crafters world has plenty of wizards who use the elements to harass you in numerous ways such as raising the ground to block your progress. The Gnorcs in the Beast Makers realm utilize electricity for various purposes, most frequently to electrify the ground you walk on. While these threats change from world to world the game does become repetitive in short order, the only real criticism I can lobby. No matter your surroundings you are still only freeing dragons and collecting gems, with the occasional dragon egg sprinkled in here and there. Some of the items requires some forethought to reach but you can largely avoid the more complicated treasure if need be. The few free flight levels are a welcome bonus; I would love to have seen more of that thrown into the main quest. While my complaints might seem harsh the game is of medium length so that the repetition isn’t that big of a deal but enough of an issue that it needs to be addressed.

The difficulty is about perfect for this type of game. The first half is incredibly easy as enemies rarely seem willing to attack and actually run away from you. Most of the items you need to collect are in plain sight and the individual sub realms are pretty small. At about the Beast realm the game seem to develop a vicious streak and sees a significant spike in challenge. Extra lives come less frequently and it seems most enemies can kill you in seconds. It’s a bit surprising since the game’s cheery exterior and easy early moments would have you believe it’s targeted at kids. But I think it hits the sweet spot at the right time where you’ve gained experience with what the game expects of you and now need to apply it.

There were many platformers released for the PlayStation in 1998 such as Gex: Enter the Gecko and Jersey Devil but Spyro is far superior to those games. Spyro the Dragon still holds up admirably and is worth a few hours of your time.