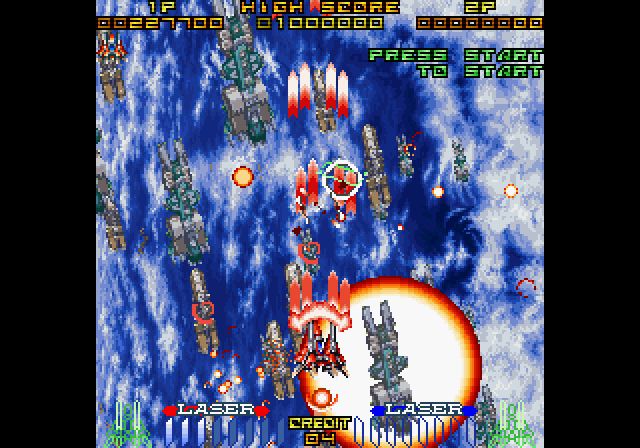 For as much as I might have made fun of the deluge of shmups during the 16-bit era (and rightfully so I might add) I genuinely missed the genre when it all but disappeared when the PlayStation and Saturn released. The concept of one lone ship fighting off an alien armada might have been done to death but god damn it if it wasn’t fun. It also sucked because that was right when console hardware was strong enough to properly port all of the truly great arcade shmups in Japan, games we would not see over here. Galactic Attack was one such game that was rescued by Akklaim and despite its 1995 release was still one of the better shooters released in that period.

In the distant future mankind entrusts its future to the Supercomputer Con-Human. Things go horribly wrong when a cloned human links with Con-Human and causes it to become sentient and insane. Its first course of action is to nearly wipe out humanity, leaving the remnants to settle in space colonies. The remaining humans plan to stage one last assault against Con-Human who has now transformed the entire planet into one global attack fortress.

Rayforce/Layer Section/Galactic Attack or whatever the hell it was called in your country of origin was among many shmups such as Dodonpachi, ESP Ra.De, and Radiant Silvergun that really brought new ideas to the genre thanks to high powered hardware. Galactic Attack was the first in a trilogy and while its sequels were good games neither managed to recapture what made this game so great. The Saturn port is more or less arcade perfect outside some small details and while a bit light on content is still a fascinatingly good time.

Like many prior shooters such as Legendary Wings Galactic Attack works on two planes. Your primary fire deals with enemies directly in front of you while your homing lasers handles ground based enemies targeted by your reticle. Although you can fire these indiscriminately they won’t hit anything unless you’ve locked on to a target. The only power-ups come in the form of yellow and red crystals that increase the power of your main cannon and “L’s” that increase the maximum number of lock-on targets to eight.

It’s a simple system but one that is given tremendous depth through gameplay. There are always multiple layers of crap to deal with in the backgrounds as enemies’ stream in and rise up to your level. Since you cannot manually move the cursor you’ll have to continually wade into a stream of fire to deal with enemies on a lower plane before things become too chaotic. By the game’s midpoint it isn’t out of the question to see 6 armored mechs all closing in on your position with a further 7 or 8 ready to launch from a bunker on the ground. The bosses are multi-stage monstrosities that need to be taken apart piece by piece with some fights almost as long as the stages themselves. In spite of all this once you adjust to the fact that positioning the cursor (which sits two feet in front of you) comes first before your own ship’s positioning the game’s simple mechanics become second nature.

One thing is for sure, you won’t complete this on your first, second, or even third sitting. Although the game only has six stages by the midpoint you will need to memorize precise enemy placements and be quick about destroying targets with your lock-on laser lest you become overrun. At times there is little margin for error and while it is incredibly difficult the game is always fair and still enticing to go back and give it one more try; when you die you know it is your own fault. The difficulty curve is perfect in my opinion; the four continues are generous and you respawn instantly at death. You couldn’t ask for anything more in a shmup.

Galactic Attack was released in the arcade right around the time 3d was in its infancy and as such still uses sprites to simulate 3d and depth. While it is a bit crude at times the art and overall graphic design is still pretty impressive. The layers of scrolling are often five level deep which goes hand in hand with the theme of flying back to Earth and descending deeper and deeper into the core of the planet to destroy the Con-Human supercomputer. Scaling and rotational effects are used sporadically, mostly for enemies ascending from the ground and to give buildings and structures depth. These elements show their age as they are highly pixelated but at the time of the game’s release this was state of the art.

The number of shooters released during the 32-bit era slowed considerably and so every game localized was heavily scrutinized. Although Galactic Attack was one of the first Saturn releases it holds up wonderfully and is still generally excellent today.