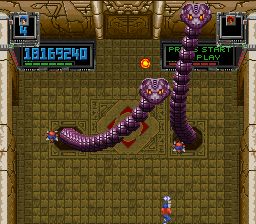 Man I really love Smash TV. The twin stick shooter has exploded in popularity in the last decade or so thanks to digital download services and while I’ve enjoyed many of them I’ll admit before the advent of dual analog sticks I sucked at them. Which makes my love of Smash TV all the more bewildering. The tight gameplay and Running Man inspired theme was awesome and I poured tons (…all right maybe about $20) of quarters into it. Yet it was the SNES port that truly won me over, not just because its controls worked so damn perfectly but because it was the best port money could buy at the time. And even taking into account its early release it is still one of the best top down shooters for the system.

More than anything else Smash TV absolutely nails the Running Man inspired game show setup it was going for. The sets, the death traps, the smarmy host, and risking life and death to collect just one more VCR, it’s all there. Yes, no one needs 500 VCRs but you know what? You’re still going to die a few dozen times trying to collect them all. Hell I wonder if the kids of today even know what the hell a VCR is. This is essentially Robotron with a more violent edge and I love it for that reason even though I sucked balls at the game.

Smash TV was ported to a variety of home consoles but the SNES version is the absolute best by virtue of the controller’s face buttons serving as a perfect substitute for the dual joystick controls of the arcade. Each button allows you to shoot in the four cardinal directions with diagonal firing also available. In the heat of the moment you might forget every so often but after a few minutes it becomes highly intuitive and most of all effectively replicating the arcade game’s controls which are incredibly important. It’s funny, for as much as I liked the game I was terrible at manipulating two joysticks at the same time. Yet mapping the same function to four buttons is all it took for me to wrap my brain around the concept. Who would have thought games like Smash TV were basically training us for where the industry would be headed in 10 years or so?

Greed is the name of the game as you rush to collect cash, prizes and power-ups in each arena as various enemies stream in to end your life. Survival is a lot harder than you would expect as there seem to be no shortage of enemies that constantly let your gluttony get the best of you and die trying to pick up that one last pile of cash. The game moves at a fairly brisk pace with each stage lasting around a minute or two. The few power-ups last a short while but are absolutely essential for survival.

Beyond just the pacing of the stages what impressed me the most is the variety from one level to the next. It would have been easy to simply ramp up the amount of enemies on every stage until the end of the game and call it a day however the game does a fabulous job of introducing new elements frequently. Some arenas are themed and will force you to deal with one enemy type while others might throw in certain conditions. Considering there are four stages with plenty of sub levels each that the game manages to keep this up until its closing moments is incredible. This SNES version even has a few exclusive hidden levels as a bonus.

If there is one area I wish the home ports would have deviated from the arcade it would be the game’s difficulty. This is not an easy game and that goes well beyond just the twin stick controls. At times it feels as though the game is permanently set on turbo speed making it incredibly difficult to keep up with the chaos. I’m of two minds when it comes to the weapons; on one hand they appear frequently enough that you won’t have to rely on the default machine gun too long. But at the same time I think they should have lasted it a bit longer, especially by the middle of the game when the machine gun simply can’t keep up with the stronger enemies; even just a few seconds more would make a tremendous difference.

The few boss battles should be a highlight of the game but they are where the game shows its quarter munching arcade roots in the worst way. Each boss is an excruciatingly long fight in which you have to dismantle the target piece by piece with the caveat being that only special weapons can damage them. Whittling down the Mutoid Man from his arms down to his torso, then a headless body, and finally a head on wheels is just cash grabbing at its finest and did not need to be replicated at home. Especially since you also only have four continues overall. It’s going to take a long time to complete this one but I wish it were for the right reasons.

You wouldn’t know it just looking at the game but Super Smash TV is something of an anomaly in terms of early SNES games. Akklaim has done an excellent job of retaining every ounce of the arcade’s intensity with tons of sprites on screen and not one instance of slowdown. Compared to embarrassing efforts like Super R-Type and Gradius III in that regard it’s a damn miracle the game plays so flawlessly outside of some flicker, especially for an early SNES title. Despite each level taking place in closed arenas the designers have done a decent job of varying up the look of the stages but overall it does become repetitive. The SNES conversion only suffers minor detail loss but is an otherwise amazing conversion. The music is mostly forgettable but the sound effects and voice clips are spot on.

Super Smash TV is an excellent conversion of a fantastic game and probably the best home port until recently. Even in light of the explosion of the twin stick shooter genre in recent years Smash TV is still more than worth your time due to its theme and accomplished gameplay.