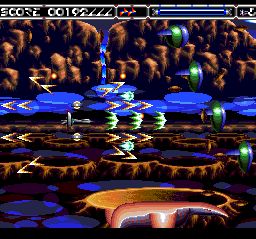 Throughout the history of the video game industry there have been many games that have relied on their graphical prowess to carry their mediocre gameplay. Usually everyone is fooled at first but it isn’t long before the realization sets in that these games just aren’t very good. Syd Mead’s Terraforming almost falls into that category but is solid through and through. The disappointment comes from the fact that the outside of its visuals and sound it could pass for any other shooter on the system.

Mankind has made Earth an inhospitable wasteland and so has fled to the stars in search of a new home. The conditions do not matter; with terraforming technology it is only a matter of finding a suitable planet to transform and so the quest begins. Sadly you’ll only find the story in the instruction manual as the brief intro only shows your ship taking off.

That premise could be the basis for almost any shooter and is fairly generic. What other shooters do not have is Terraforming’s phenomenal visual design. Terraforming is blessed with visionary sci-fi artist Syd Mead’s art direction and as such the graphics are simply fantastic. Even when compared to the system’s finest releases (Rondo of Blood, Lords of Thunder) the game stands out. The various planets you’ll visit certainly span some of gaming’s most well-worn tropes yet they look like nothing you’ve seen before. The enemies don’t seem like generic fodder but the indigenous life forms that would inhabit that environment, a touch that most games lack. As many as six layers of scrolling give each of the beautiful backgrounds a sense of depth rarely seen on the Turbo and the game rarely if ever slows down.

The soundtrack is similarly excellent and more than likely the reason the game is on a CD. The music ranges from hard rock to slower orchestrated melodies that are rousing and upbeat. The sound effects on the other hand are weak and lack punch. It sounds minor but in a shooter you expect loud explosions and not the muted pops here.

The game is surprisingly light on weapons but that is probably because what is there is overpowered. Like R-Type your ship will charge up a more powerful beam when not firing although this isn’t as useful in a pinch. The special weapons consist of the wide shot, homing Vulcan, and the laser, all of which can be powered up multiple times along with the standard cannon. At full power the wide shot can blanket a sizable chunk of the screen. The homing Vulcan aggressively seeks out enemies to the point you won’t even see them most of the time. Its only weakness is a lack of power. The laser is the most powerful but can only fire straight ahead. Like Gaiares and Sol Deace your rockets when switching speed can be used as a weapon but trust me that isn’t happening.

Between its production values and solid weapon setup Terraforming has the makings of one of the finest shooters ever but is actually fairly bland. Each of the game’s eight levels is highly imaginative and even when covering familiar territory still feels original. The volcanoes of stage 2 cause the screen to flash when they erupt, with enemies, bullets and your own fire framed in black. The wavy backgrounds of stage six almost come across as one long acid trip. But these moments are few. The majority of your time is spent destroying the same enemy waves that repeat multiple times in succession. The levels tend to run longer than they should and by the halfway point you’ll simply want it to end.

In stark contrast to most shooters Terraforming is exceedingly easy. At full power you can take six hits before death. It takes very little time to achieve max power as power-ups make an appearance regularly. Once you die the game is even generous enough to provide one random weapon so you aren’t totally helpless as well. Both the wide shot and homing Vulcan cover so much space there is very little need to ever switch weapons, leaving the forward facing laser the odd man out. Most players will breeze through the game up until its final chapter at which point it seems everything but the kitchen sink is thrown in your path. The few continues I used to complete the game all came from here and if they had spread a little bit of that challenge to the rest of the game this would be a lot better.

Bumping the difficulty up to hard offers a glimpse of what could have been. Here the enemies become more aggressive, firing more shots and attacking in more varied patterns. With the increase in the number of bullets covering the screen it becomes more imperative to kill enemies as soon as possible and switch weapons when necessary. The lasers power and ability to pierce walls becomes invaluable on certain levels as the homing beam’s weakness means it can’t kill enemies fast enough and will actually get confused chasing them around. In my opinion hard mode should have been the game’s default difficulty as it results in a more complete experience.

It’s too bad the stellar production values aren’t backed up with superb gameplay. Don’t get me wrong, this is far from a bad game but it is slightly generic. Go into it expecting a solid game and not the mind blowing experience the graphics and sound would have you expect and you will be entertained.