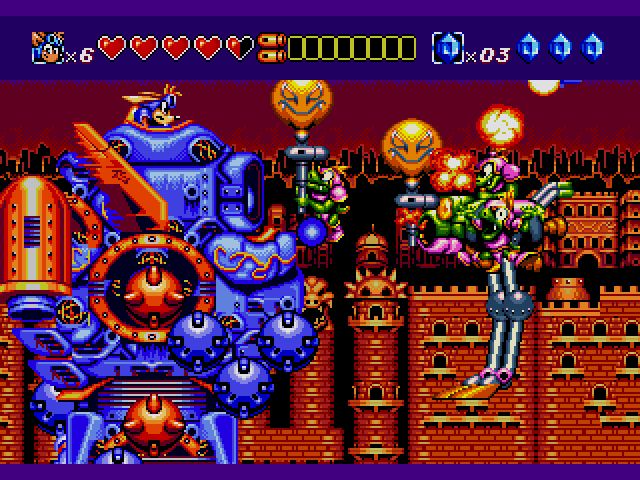 It will forever remain a mystery to me as to why Konami’s Sparkster became a forgotten relic of a time long past. Rocket Knight Adventures was fantastic, both highly original and just an all-around great game. Sequels followed a year later but then nothing for close to 16 years until the decent 3d game. While it isn’t up to the level of its extraordinary predecessor Sparkster is still a good game and worthy follow-up.

After the defeat of the Devotindos empire peace returned to the kingdom of Zephyrus. However it wouldn’t last as the Gedol Empire has invaded, kidnapping Princess Cherry with the help of Axl Gear. Sparkster is once again called into action. The enemies this time around are lizards rather than the pigs and wolves of the other games which is pretty interesting. It would have been interesting to see other kingdoms based on different animals if the series had continued but oh well.

There have been a number of significant gameplay changes made that result in a faster paced game. The most vital is the rocket pack. Rather than holding down a button to charge it now does so automatically with the A button activating it. The meter fills quickly and can be used in rapid succession to stay airborne almost indefinitely or for split second rocket attacks. It also fixes one of the few flaws of RKA where you were left flailing in the air after a boost.

One change that isn’t welcome is the sword. Sparkster’s sword is now melee only and is effectively useless. The attack is achingly slow and the hit detection is suspect. Because of this you’ll rely on the spinning sword attack far more or the weaker boost attack. It also makes the flaming sword power-up worthless since you’ll lose it in seconds. This all sounds damning but the automatic boost makes using it for offense much more palatable but not ideal.

The level are more wide open to allow you to more freely rocket around each stage but not to the same extent as the SNES game. With the change to the boost this is more of a straight action title than one of exploration, with the game constantly shuffling you from one set piece to the next. There is notably less of the slower paced, almost puzzle like stages of RKA and the game suffers for it. Don’t get me wrong there is still plenty of fun to be had ping ponging through tight corridors and such but the sheer variety of Rocket Knight is what made it special. The one new addition comes in using the rocket pack to function like a screwdriver. The game makes excellent and extensive use of it, from loosening pieces of the environment to unraveling bosses piece by piece. If they had shown this much ingenuity throughout the game would be much stronger.

There is some incentive to explore the levels in the form of the golden swords. On each level is a golden sword that will change you into golden Sparkster once all six have been assembled much like Super Sonic. To see the true ending you must collect them on normal or hard; easy mode ends early and even cuts out chunks of its few levels.   Overall this is a shorter game with about the same difficulty as the original so most will complete it in an afternoon. But you’ll have a hell of a time doing so.

Of the two Sparkster games the Genesis version is the only one to be branded with the Rocket Knight Adventures 2 moniker (at least in Japan), implying that this is a direct sequel. From a story standpoint that is true but funny enough it is the SNES game that stays true to the gameplay of the original. The changes made in the Sega game are interesting but come at the expense of the creative level design that made RKA so damn amazing. However even in spite of that the core concept of an anthropomorphic critter with a rocket pack is still there and you would have to actively try to make a terrible game with that premise.

Graphically this is both a step forward and back. Sparkster himself has been redrawn and is less bulky; he looks more aerodynamic. The sprites overall have been reduced in size but exhibit a greater range of detail and animation. The backgrounds however have suffered the most. For every six layered slice of heaven there are an equal number of completely flat backdrops that really seem out of place. Special effects are kept to a minimum so luckily the game’s strong art picks up the slack but the game does seem a bit lacking compared to other 1994 releases.

The soundtrack once again is generally excellent, both in quality and range. A few of the tracks are shared with the SNES game which makes for an interesting comparison. Depending on where you fall in the FM synth vs orchestrated argument your preferences are being catered to. This is one of the few cases where I actually like both interpretations and can’t really say one is better than the other, which I attribute to the strong composition.

It doesn’t quite measure up to its legendary predecessor but at the end of the day Sparkster is still worth a purchase. While I personally prefer the SNES game that doesn’t diminish the quality of its Sega counterpart.