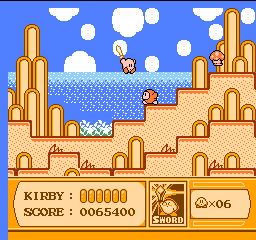 After his initial Gameboy outing it has become somewhat of a tradition that Kirby’s best outings are released toward the end of given platform’s lifespan. Kirby 64 was one of the last Nintendo 64 games and Kirby’s Return to Dream Land was also one of Nintendo’s last Wii games. Kirby’s Dream Land 3 was released so late for the SNES most probably aren’t aware it exists. Kirby’s Adventure was Nintendo’s last major release for the NES in the US and boy what a sendoff. Kirby’s Adventure not only pushed the system harder than nearly any other game but is in the running for best platformer for the system.

In light of that fact it’s actually pretty surprising how far under the radar Kirby’s Adventure has been. By 1993 the 16-bit was in full swing and any NES game, no matter how brilliant just couldn’t compete for attention. I think it wasn’t until the Gameboy Advance remake in 2002 that everyone would realize just how amazing the game truly is. You could make a strong case that this is the best overall NES game but I’ll simply say that the number of platformers for the system that are better can be counted on one hand with missing fingers.

Kirby comes fully equipped with a versatile set of abilities. By holding B he can inhale to suck in enemies, blocks, and even air which can then be expelled as a projectile. Taking in air will allow you to float indefinitely although you can’t attack at the same time. These basic powers mean that the default Kirby is never powerless regardless of the situation although it is less than ideal, especially during boss battles.

The defining mechanic of the game and the series going forward however comes from the over 25 abilities that can be copied from the various enemies throughout the game. There’s a great deal of variety to the different powers from a sword, a laser beam, a tornado, to the more esoteric like turning into a tire or fireball. While most are offensive in nature there are plenty of defensive and movement related powers to play around with as well. Every level has at least 5 powers that can be copied and generally it is a good idea to learn the strengths and weaknesses of each since you never know when you’ll be stuck using a less than ideal ability.

Beyond the fun of exploring the depths of all the abilities you can utilize is how they are integrated into the game. Every level has multiple paths, hidden doors, bonus areas and secrets that can only be found using a particular power. Sometimes the necessary enemy is in the vicinity, other times you might need to carry it over from a prior stage. It would have been very easy to pack the game full of different powers for the sake of it but the fact that the game literally encourages you to play around and experiment is one of its greatest charms.

It’s astounding just how much depth and variety there is in the game, even rivaling Super Mario Brothers 3. While there aren’t as many levels here as in that game there are just as many secrets. Plus you can revisit any prior level at any time. One plus in Kirby’s favor is its battery back-up. Regardless of how easy it is this is still a pretty long game and the fact that you won’t have to start from the beginning every time is a point on Kirby’s side over SMB 3. I love that game to death but someone needs to be shot over that.

If there is any one criticism I can lobby at the game it is that it is far too easy. Extra lives aren’t doled out so commonly throughout each stage but the various minigames and such you can participate in between levels award them like candy. Beyond having ample stock of extra lives the life bar makes it incredibly easy to brute force your way through even the toughest circumstances. I can’t believe I’m even thinking this but if the life bar were capped at three hits it would have introduced some amount of tension outside of the boss battles. Despite the seven worlds and around 40 levels most will breeze through this in one afternoon with little trouble. But I can guarantee you’ll enjoy every moment of it.

At 6 megabits Kirby’s Adventure is the largest NES game released in America and the extra space is not wasted. There is no question that this is one of the most visually fantastic titles for the system with very few games on the same level. The smart use of color defies the system’s 16-color limit as the presentation is more vibrant and detailed than any other platformer on the system. There are even a few special effects such as the rotating towers that were the defining feature of other technical beasts such as Ufouria and Gimmick. After seeing Kirby in motion I doubt the system could be pushed any further; this is what 10 years of programming experience on one platform can produce. Even the soundtrack is fantastic although a bit cutesy but I don’t care

In spite of the game’s ease of difficulty and slightly short length I have no hesitation in recommending Kirby’s Adventure to anyone that is a fan of the genre. This is easily one of the best NES games of all time.