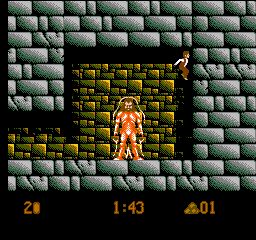 1992’s Dracula movie was one of the biggest film events of the year. With the insane amount of hype behind it Sony Imagesoft were keen to cash in the following year with a series of video games for every conceivable platform available at the time. Seriously even the Sega Master System received a version of the game. Regardless of the platform all of the games were flawed in some way and while they aren’t as bad as your typical licensed product a little bit of balancing would have gone a long way towards making them decent titles.

All of the 8-bit versions of the game share the same structure with the primary differences being the presentation. The Master System game is far and away the best in terms of graphics and overall game balance. The NES version, which was also one of the last games released for the system, is a weaker game overall not just in terms of aesthetics but due to unwarranted gameplay changes that make it a more frustrating game overall.

Although the comparisons to Castlevania can be made since the two games share the Transylvania setting and Dracula as an antagonist this is far removed from that game. Dracula is as bog standard a platformer as you can get, to the point where you collect items from question mark blocks like Super Mario Brothers. The only thing that would have made this more blatant would be if you had to bust them open with your head but I see someone wisely chose not to go that far.

Jonathan Harker has a knife as his default weapon but can upgrade to various projectiles such as axes, rocks and torches. In place of coins are diamonds that help your end level score to receive extra lives. The only other “item” comes from Van Helsing, who is hidden in each stage. If you find him (good luck) you will receive a more powerful weapon to use against the end level boss.

Each of the game’s five levels (eight if you play on hard to see the ending) are split into a daytime and nighttime segment not that there is much difference between the two. In spite of the abundance of weapons available combat is kept to a minimum, with the game having a heavy emphasis on platforming. The level design isn’t at all complex with the only complex action involved being how to reach the occasional switch. Having said that the controls are relatively sharp and you’ll be able to hop about the environments with ease, not that you’ll want to as the game just feels bland. With platforming that doesn’t rise above the first Super Mario Brothers and very little action outside of the occasional bat and ghost there’s not much excitement to be had that isn’t better in dozens of other games.

The changes made to this version of the game have made it much more difficult overall. You take twice as much damage from attacks and life restoring hearts aren’t in great supply. The time limit has been reduced compared to other versions of the game leaving you with little time to explore each level for items. The most aggravating change however is the placement of the ghost enemies. There is very little visual cue whenever they are about to appear and their placement is almost always in front of a pit or platform where you can’t quickly adjust to avoid taking a cheap hit. The cheap hits leave you with very little health if you even make it to the end level bosses which are already hard as is. Not to say that the game was a masterpiece in the first place but it at least wasn’t this bad.

The graphics are decent if nothing special. There are very few outdoor environments with the majority of the game taking place in a number of different castles. These all seem to share the same basic design only with a different color palette which is lame. John Harker’s sprite is flat out terrible, especially considering this was released a few months shy of 1994. In stark contrast the various incarnations of Dracula are more detailed although lacking in animation. The music is absolutely terrible, ear splitting and repetitive; it is not often that I’ll mute a game’s music or listen to my own but this game’s “soundtrack” was a prime candidate.

Bram Stoker’s Dracula isn’t as bad as some of the drek LJN pumped out but as a late 1993 release it pales in comparison to other NES releases such as Kirby’s Adventure. There simply is no reason to bother with this average game.