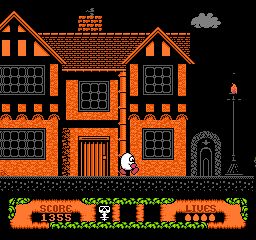 I’ve always been fascinated by the European gaming industry. Where the video game market crashed in the US in the early 80s in Europe gaming shifted to the various computer formats and the arcade. While the Commodore 64 might not hold much reverence among American gamers it along with the ZX Spectrum and Amiga were practically legendary over there. Where we worshipped Mario they prayed at the altar of….James Pond. I’m exaggerating there of course but it does highlight the difference in games that were popular between the two countries. The Dizzy series of games highlight this.

I won’t go so far as to say that the Dizzy series of games were Europe’s answer to Mario but it was definitely huge. The games have their own mythos and family of recurring characters and while most have been platformers its most famous installments have incorporated adventure game elements. The Fantastic Adventures of Dizzy was ported to a variety of formats but it was the NES version that I spent the most time with. Although I spent many hours slowly making progress through the game even back then I was aware that the game had some serious problems, ones that ultimately doom its appeal.

The evil Zaks has returned to cause trouble for the Yolkfolk, casting a spell on nearly all of Yolktown’s inhabitants and kidnapping Dizzy’s girlfriend Daisy. It’s up to Dizzy to fix each Yolktown inhabitant’s maladies to ultimately reach Zak’s castle and save the girl.

Dizzy’s happy go lucky disposition and expressiveness were pretty awesome for the time and imbued him with a sense of personality. The entire visual presentation is vibrant and cartoony and works perfectly well with the game’s tone. Throughout the game you will meet many people who all have some problem that needs solving such as creating a potion for Grandpa Dizzy’s sickness or waking up Dozy.

As an adventure game the entire world is more or less open for you to explore. The game gives no hint as to the ultimate goal of your quest which is disingenuous. Your only real objective is to collect the 100 Stars needed to enter Zak’s castle, the majority of which will require you to help each of the Yolkfolk in some capacity. There are plenty of items scattered around the world but Dizzy can only carry three at a time but can drop them when necessary. It’s a big world with many sub locations such as a pirate ship, a mine, a castle, and even an undersea environment with key items at every turn that will force you to drop something and remember its location for future use.

The three item limit is both the game’s greatest strength and weakness. Throughout the entire world are items needed for progression and your limited inventory will force you to prioritize. Gathering three components and combining them to solve a puzzle is incredibly rewarding and provides some impetus to soldier on. However that same inventory limit is also the source of much frustration. Key items needed in one corner of the world are usually located on the opposite end of the map, in areas that you’ll need further items to access. The fetch questing is pretty strong here and it’s entirely possible to drop a major item somewhere you can’t access again, forcing you to start over.

I’m not one to harp on a game’s challenge so long as it is fair but in this case Fantastic Dizzy is far too frustrating for the average person to deal with. Literally everything can kill you in seconds from the annoying spiders to the lowly ants that roam around. This is a pretty long game full of trial and error and the fact that you only have three lives plus whatever 1-ups you can scrounge to complete the game is absolutely bull shit. This is the type of game that needs battery back-up or passwords to chart progress. The fact that you can easily die (and will) on a whim after hours of progress and will have to do it all over again is just bad game design. This is a far cry from Treasure island Dizzy, where you only had one life and one hit meant instant death, that was just…….gah. The various minigames such as the mine cart ride or the swift river ride are long and full of obstacles that equal instant death. No one can complete these in one sitting without a map of some kind and chances are you probably won’t get to these parts of the game until later, meaning you can kiss all of your progress good bye. Honestly even as I played the game repeatedly back in the day this stuff annoyed me so playing it again dredges up all those bad memories.

As much as I laugh at the tin foil hat conspiracy theorists in this case I’ll join in with them, I get the sense that Codemasters purposefully designed the game this way to sell more Game Genies. That’s the only rationale I can come up with as to why so many blatantly stupid design decisions made it into the end product.

I really, really wanted to like the Fantastic Adventures of Dizzy but I just can’t recommend it to anyone save masochists. Adventure games weren’t too common for the NES but not so scarce that you should subject yourself to one as flawed as this.