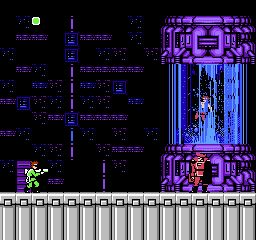 You can’t jump. It’s a weird way to start but I can guarantee nearly everyone fortunate enough to play this back then had the same thought. This was platform gaming during its rise to power man! Not having the ability to jump in a platformer back then was like Mario without pipes (wait a second, Super Mario Brothers 2….).  Blasphemous! Lucky for Capcom then that they provided an alternative that would turn out to be even more awesome than a stock jump button could ever be.

Bionic Commando was released in 1989 for the NES. This was a totally original adventure separate from the arcade game which would turn out to be a wise choice. Not many have even heard of the arcade game let alone played it but holy shit is it terrible. Bionic Commando places you in the shoes of Radd Spencer as you embark on a mission to rescue fellow soldier Super Joe, who has been captured by the Badds. Look we all know that the Badds are really Nazis it’s just funny how inconsistent they were in terms of censoring that.

The game is divided into 3 parts. The map is split up into 19 areas with various routes in between them. No fighting occurs here but there are various trucks moving about at all times that you will run into inevitably from time to time. These lead to quick overhead stages whose sole purpose is to net you 1 or 2 continues. The 19 areas on the map are separated as such: Areas 13-19 are neutral areas where no violence is tolerated. You retain all of your weapons, however if you fire even one shot all of the NPCs will disappear and a never ending torrent of enemies will assault you until you leave. The neutral stages will usually have an item you will need to progress such as the different communicators. Some have enemies but you can largely avoid them without killing if you use your head. There’s only 1 instance where you need to fire a shot to continue.

Areas 1-12 are action stages with a boss and a computer at the end that will give you a weapon or item once defeated.  Getting to each action stage isn’t as straightforward as you expect since you’ll inevitably run into trucks along the way.  Some stages are blocked off until specific requirements are met, like Area 8 and 12.  Regardless, the action stages are where the bread and butter of the game lie.

You get to choose your weapon, communicator, and 2 side items prior to every stage. These are gained after destroying the generator at the end of a level. Your primary “weapon” is your bionic arm. Your bionic arm is like an all in one Swiss army knife. You can’t jump so it is used to latch onto platforms or even objects lying around to pull yourself forward or even straight up. It’s trippy at first, because your every instinct will be to hit A and jump. Although you can’t directly kill an enemy with it it is possible to push them off a ledge by hitting them repeatedly.

You receive 5 different weapons that function…………I’m not going to bullshit you, once you receive the Rocket Launcher you’ll never switch weapons again. Mowing down multiple enemies in 1 shot including bosses? Yes please. Almost every enemy you kill will leave behind a bullet. These act as experience points in a fashion, in that once you’ve collected a certain amount you’ll gain another hit point, up to a maximum of 9. Every level follows the same format: get in, find the communicator room to open the boss door and destroy the generator. Your journey will take you to a wide range of locales thatwill kick you in the teeth as the game is viciously hard.

You won’t see these parts of the game unless you master the bionic arm.

Right from Area 1 you’ll have to make numerous precision “jumps” with your arm or die. Mastering the timing of latching onto objects and pulling yourself up without accidentally releasing and killing yourself is key. Because you can’t jump, rather than simple point to point platforms you’ll often have to latch onto multiple posts in a row and chain swing. Judging your momentum and how far you’ll swing is tricky and its disheartening to fall nearly to the beginning of a level due to a slight mistake.  There is no margin for error by the time you reach Area 6. You begin with no life bar, so if you are really just unlucky or don’t pay attention to how many bullets you’ve collected it is entirely possible you can reach the later areas with only 2 or 3 hp.

The game on the whole can be very unforgiving. Another thing that really makes me mad: there are a total of 4 communicators are needed to open the boss rooms. The only problem is with the exception of the first one there are few if any clues as to which communicator to use on each level. You won’t know until you reach the communicator room and fail. Some of the later levels place the rooms almost at the tail end, leaving you with no choice but to exit and do the whole stage over again which is really unfair. The game is very long and has no battery backup or passwords so it’s all in 1 sitting or start over.

But you know what? None of that tarnishes just how excellent the game is. At most they’ll turn out to be minor inconveniences. This is one of the best games on the NES, both in terms of graphics and sound, and it has a unique gameplay hook that will entertain you just by itself.