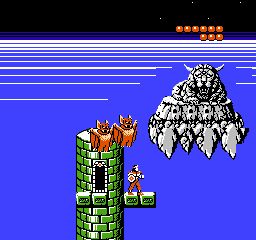 It’s funny, some franchises that got their start in the arcade and NES are practically legendary, and then there are others that seemed to fall just short of the mark.  Rygar is one of those games, a game that is fondly remembered but didn’t quite reach the same plateau as your Mega Mans, Castlevanias, etc.

Rygar was released in 1987 in the US in both the arcade and the NES.  While using the same characters, weapons, and enemies both games are radically different.  The arcade game was a straight platformer, while the NES game followed in the Metroid vein.  I’ve only seen the arcade game once, and just my luck it didn’t work so I’ve never played it.  From everything I’ve read the home game turned out much better despite the two debuting at the same time.  The somewhat bare story has Rygar out to defeat the King Ligar (clever) to save the land of Argol.  That’s it.

You have a large open world to explore at your leisure as you search for the five Indora gods who will bestow essential items needed to progress.  To some degree there is some sequence breaking in terms of which items you obtain but for the most part there is a set order.  Gameplay is split between the side scrolling portions in the overworld and the “stages” you visit from overhead “Hub” world.  You’ll spend a good portion of your time in these parts searching for the next level and speaking to wise men who give you really obtuse clues.  Once you do, the game kicks into high gear and can stand with the best side-scrollers of the time.

Your odd choice of weapon is the disk armor, a burning flail on a chain.  You collect Tone that will upgrade your strength at certain levels, and Last, which boosts your life bar.  Mind points are left behind by enemies to power 3 spells, power-up, attack and assail and recover.  Kind of a barren arsenal but truthfully that’s all you need.  The items you’ll receive from the gods are needed to reach previously inaccessible areas, and have their uses in both parts of the game, especially the grappling hook and crossbow.  All of these elements make for one of the best games on the NES if not for one thing.

You see those enemies?  They won’t stop.

The game’s biggest failing would be the challenge.  Early on you can only take 2 or 3 hits before dying.  The hordes of enemies are relentless.  Seriously.  Even if you stand still they still spawn in groups of 2-4, sometimes even more which will cause crippling slowdown.  You have unlimited continues to combat this and the game does a good job of starting you close to where you left off.  The boss fights are incredibly cheap, and while it sounds like a good idea to let you continue at the boss upon dieing, it amounts to a death sentence in that you will have no power-ups and not even full life.

I mentioned the obtuse clues you are given; that description doesn’t do it justice.  Locations to visit are mentioned by name, but it’s not as if the game bothers to name them when you finally do reach them.  You have to assume that “well this area looks like what they were talking about”.  Finding Ligar’s palace or Lapis will require you to use your grappling hook in the strangest locations just to see what happens.  Metroid works with little direction (well the first one) because generally you’ll know quickly whether you should be in a particular area or not.  Here you can wander pretty far in a zone and then reach an impasse forcing you to go back.  I mentioned unlimited continues earlier.  That’s all you get.  No passwords, no battery backup.  Even today this is still a long game, and expecting it to be finished in one sitting is totally unfair.

Kind of sounds like I’m harping on the game but I’m not.  It still remains very playable and is excellent, however the years have taken a little shine off the game’s luster.  Go in with knowledge of these flaws and you’ll still have a good time.