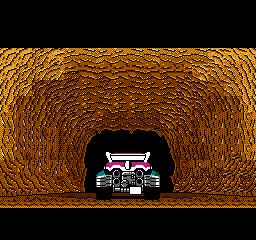 My summer of 1994 was mostly dedicated to two games: Battletoads and this gem here, Blaster Master.  Oddly enough, I had read the Worlds of Power (remember those books?) adaptation before playing the game itself which might have slightly clouded my perception of the game beforehand.  Those preconceived notions would quickly disappear however as Blaster Master is one of the best games for the NES.

Blaster Master was released in North America in 1988 and starts off with a completely ridiculous story.  The story finds your pet frog Fred deciding he’s sick of being cooped up in a fishbowl and hopping out the door and onto a fucking chest of radioactive waste sitting in your backyard.  Read that again.  It gets better.  After mutating like the Ninja Turtles he jumps in a hole in the ground that was oh so conveniently there for no reason and like a moron, Jason jumps in after him.  Somehow he doesn’t break his neck and discovers the tank SOPHIA the 3rd and hops in to go after Fred.

It should be noted that the story is completely different from its Japanese counterpart, in which your home planet SOPHIA the 3rd is conquered by the emperor Goez.   The lone survivors of the assault build you an advanced weapon called the Metal Attacker to fight back.  Yeah, they sure did take creative license when changing that.

Some coked up executive had way too much fun coming up with that.

The game has 2 distinct modes of play.  The majority of your time is spent in SOPHIA as you explore the world Metroid style.  While the game does not have traditional levels, it is split up into 8 themed areas that have their own end boss.  Each boss coughs up an upgrade for your tank that will allow you to go back to previous levels and advance past barriers to find the next level.  The second are the overhead segments where you leave SOPHIA behind to explore various caves and rooms to upgrade Jason’s primary weapon and find power-ups for the tank.

While you can leave the tank at anytime it’s not advised as the enemies in the “overworld” will destroy Jason in 1 or 2 hits, plus you can scarcely fall more than 3 feet without taking excessive damage.  All of the bosses are fought by Jason, which encourages you to at least visit some of the rooms to upgrade his gun.  SOPHIA and Jason both have separate life bars thankfully and only while on foot will your weapon downgrade if hit.

So what makes Blaster Master so good?  Everything.  Equal attention was paid to both parts of the game.  The controls for both characters are sublime; you’ll be leaping over vast distances in your tank one minute and moving at a brisk pace as Jason overhead.  As the upgrades pile up SOPHIA’s mobility will increase.  You will eventually gain the power to scale walls, ceilings, and hover, with all of these powers necessary to progress. Unlike most Metroid style games, the level layouts are never drastically confusing, and although you have to find each one on your own with no hints, generally you’ll see areas that you know you’ll have to come back to later, I would even go as far as saying they’re intentionally in your field of view for that reason alone.  There are many pathways you won’t be able to reach or will question why its even there, then when you get an upgrade realize its a shortcut to travel between areas.

The game isn’t afraid to take you out of your comfort zone, with levels requiring extensive amounts of time in the overworld as Jason, more specifically areas 4 and especially 5.  It’s an odd choice to not have any bosses to fight in SOPHIA, but it technically is Jason’s journey so it feels right that he should be the one to take them down.  The one thing that stopped most gamers, and I would be remiss if I didn’t mention this, is the difficulty.

Yeah, prepare to see the game over screen a lot.

I wasn’t joking when I said I spent my summer of 94 playing this.  You have limited continues with no passwords or battery backup to finish the game, and like Bionic Commando it is long.   Once you know where to go for each level you can breeze through it, but to reach that level of familiarity  will require a lot of blood, sweat, and tears.  You won’t generally find yourself in danger of dying while in SOPHIA as enemies drop extra health in ready supply.  The dangers here are environmental hazards like spikes and lava.  When you are on foot you are very vulnerable;  Jason moves very fast in these parts and it isn’t uncommon to walk into unseen enemies.  Your weapon downgrades when you get hit, and the path to the bosses can be long, leaving you screwed if you take too many hits prior to arriving in their lair.  All power-ups reset when you leave a room, but that can be tedious, especially in the longer sections.

The bosses, definitely the highlight of the game, are relentless and can seem impossible at times, but there is an awesome glitch you can exploit on half of them.  The very popular grenade trick which was printed in all of the magazines of the time allows you to hit a boss with a grenade and pause at the moment of impact, with hits still registering.  After about 10 seconds, voila!  Dead boss.  This could also backfire on you, if you get hit and pause at the same time, you’ll also continue to take hits.  It sounds like all of this is a bit much to deal with, but like most of the NES games that shared the same level of challenge; you soldier on and deal with it because the game is awesome.

Sunsoft consistently proved they were one of the top NES developers of the time and Blaster Master continued that legacy.  If it had battery backup or passwords it would be perfect, but that is irrelevant in the grand scheme of things.  Blaster Master is unquestionably another notch in Sunsoft’s belt.