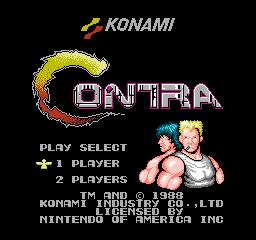 In the 80s there weren’t really any dedicated videogame stores like GameStop or Electronic Boutique.  You went to your local Sears, K-Mart, or if you were really lucky, Toys R Us for the latest games.  Since they didn’t know any better, they were very lax when it came to returns.  You didn’t even need a real reason, so long as you had the box and a receipt you were good.  My family and I abused the hell out of this system, buying a game finishing it a day later than trading it for something else.  Even better, if you bought a turd you weren’t stuck with it like now.  This particular time we traded in Star Voyager (oh lord what a load that game was) for Contra without knowing the slightest detail about it.  Oh man what an awesome decision that was.

Contra stars Bill and Lance as they journey through 8 stages to defeat Red Falcon and his alien hordes in 1 or 2 player coop action.  Konami’s US offices were on a US movie kick, and the cover art is very obviously Arnold Schwarzenegger and Sly Stallone as our titular heroes.  Originally an arcade game Contra was ported to the NES in 1988 by Konami themselves.  The home version differed from the arcade in a few ways.  All of the levels are far longer than the coin op and there is no time limit.  Levels 2 and 4 are no longer mazes that you work through; instead they feature one linear path.  A few of the bosses were also changed.  I wasn’t aware of any of this at the time.  I wasn’t even aware of the arcade machine’s existence until about 2 years later when I was finally able to play it.  While it looked better I definitely feel the home version was an upgrade.

For most of us Contra is all about the weapons.  The soon to be familiar Falcon icons appear a few seconds after you start and give you a taste of the armaments available.  Rapid Fire, Machine gun, Laser, Fire, Spread Gun, all the weapons in the game are present on the very first level with the exception of the Barrier and the……..I guess I’ll call it a Bomb that destroys all enemies.  You get to sample each one right away and decide which is your favorite.  All of them have their strengths and weaknesses but it’s entirely possible to play through the game with any one, even your ordinary pea shooter.  For my money it’s got to be the spread gun man.  I mean come on, you can cover a good chunk of the screen with it!  Your choice will largely determine how much harder the game is, and make no mistake, it is hard.

One shot and you’re dead, losing any weapon you had.  This was soul crushing if you had managed to keep the same weapon for numerous stages and boom, now you’re screwed.   The standard pistol is workable but not ideal, and you’ll face numerous machines and even enemies that require multiple shots to kill.  Pray to god you don’t die on a boss, you might as well kill yourself and do it over.  In 2-player, scrubby players can get left behind or caught in the scrolling of the stage, such as the Waterfall in level 3.  You can even unintentionally make your partner miss a jump by going too far ahead at the wrong moment.  I’m not sure if it was intentional but in coop if one person uses all of their lives they can borrow one to rejoin the action.  I’m pretty sure it was meant as a way to keep both players in the game but from experience I can tell you in my circle of friends it was used in order to be a douche bag.  Unfortunately I was the scrubby little brother that would end up killing both players and using up all of our lives back in the day; what can I say multiplayer was not my forte.

The Konami code wasn’t started here, that distinction belongs to Gradius but this game popularized it.   With it you have 30 lives to recklessly spend working your way to the end.  This is pathetic but I know some people who still can’t beat the game with the code.  I mentioned the difficulty but in my case I never really noticed it.  I was able to finish the game just fine the same day I bought it, even in coop.  And I’m terrible at multiplayer.  Your mileage might vary of course but christ turn in your gamer credentials if you still fail with 30 lives.

For its time this was THE coop game.  Even now it’s still fun to do a quick run through.  This was the start of a beloved franchise in gaming, and it’s easy to see why.