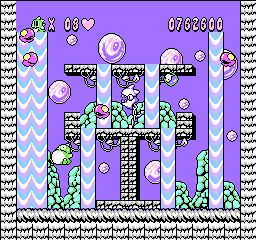 1992 saw many late classics for the NES and allowed the system to go out with its head held high. Or it would have if the flow of games didn’t keep coming. As the last full year the system was supported 1993 had many gems that have now gone on to become highly sought rarities with Bubble Bobble 2 among that list. There is some ambiguity as to whether it was even sold in stores or rental only but that is irrelevant. As a sequel it not only expands on the gameplay of the first game but refines it as well. If you are even a slight fan of the single screen platformer Bubble Bobble 2 is worth tracking down.

Those familiar with the series can jump right in as little has changed. Bub and Bob both blow bubbles (Wow) to entrap enemies at which point a vicious head butt will knock them out. New to their arsenal is the ability to inflate themselves to float and release a torrent of bubbles when done. Inflation is an invaluable skill, especially for those who found it tricky to hop on bubbles in the original. The new bubble blast (my name, don’t’ steal it) is handy for the new stronger enemies who require more hits to defeat. Both skills see extensive use, especially in the latter half of the game when time is a commodity. The number of items has been pared back significantly but the stronger level design means you won’t miss them at all.

Perhaps the most striking aspect of Bubble Bobble 2 is its visual overhaul. The first game was stark in its simplicity but was still able to properly convey what it needed to. But in the wake of games like Snow Bros. and Joe & Mac 3 it no longer sufficed. The plain black backgrounds have given way to fully detailed landscapes that change every 10 rounds. The sprites are larger and more expressive and the game seems to have been given a jolt of color. The change of scenery every 10 levels helps in staving off the repetition so inherit in this particular genre and has the game fall in line with other late era releases.

The graphic overhaul is more than just for show as it has also affected the level design. The stages are no longer a simple collection of long and short platforms but also sport more wide open expanses and are actually themed. The world is no longer strictly static as there are now moving platforms, vehicles, and even a few levels that span multiple screens. It has a huge impact on how you approach getting all the enemies within the invisible time limit and is much more dynamic. There are new enemies joining the roster this time around, the most dangerous being the larger beasts and mechanical contraptions that require multiple hits to destroy. These are the assholes who will waste your time and end up summoning the grim reaper at the last possible minute.

Every 10th round ends in a boss battle that unfortunately aren’t as creative or challenging as the last battle in the original. Most simply involve blowing a bunch of bubbles in rapid succession, sometimes before they even have time to act. That simplified difficulty extends to the rest of the game as there are less enemies to contend with overall in favor of more gimmicky levels that affect gravity or place one major enemy in a precarious position (round 45 is probably the hardest in the game). Unfortunately there are no passwords so you’ll have to play through the entire thing in one sitting. Who thought that was a good idea?

The structure of the game is identical to Snow Bros. and in my opinion that is a plus. A change of scenery every 10 levels with a boss battle to cap it off is excellent not just because its good design but because it eases a bit of the monotony. This is a long game at 80 rounds and regardless of how fun it is the repetition will eventually set in. Having something new to look forward to is a blessing in that regard.

One curious absence that makes no sense is the omission of coop. I’m not much of a multiplayer gamer but I thoroughly enjoyed playing the original with friends as it was tremendously fun to tackle the game with a buddy. Requiring two players to see the ending was stupid but whatever. Whether it was done in response to that is irrelevant but the lack of coop is a huge blow to the game as the multiplayer was probably the biggest selling point.

Despite that glaring flaw Bubble Bobble 2 is a worthy sequel to the excellent original. The only problem is finding it. This is one of the rarest NES carts around; whether it’s a butt naked cartridge or CIB you’re looking at spending a few hundred dollars like the rest of Taito’s late Nintendo titles like Little Samson, Panic Restaurant and The Flintstones Surprise at Dinosaur Peak. Good luck is all I’ll say.