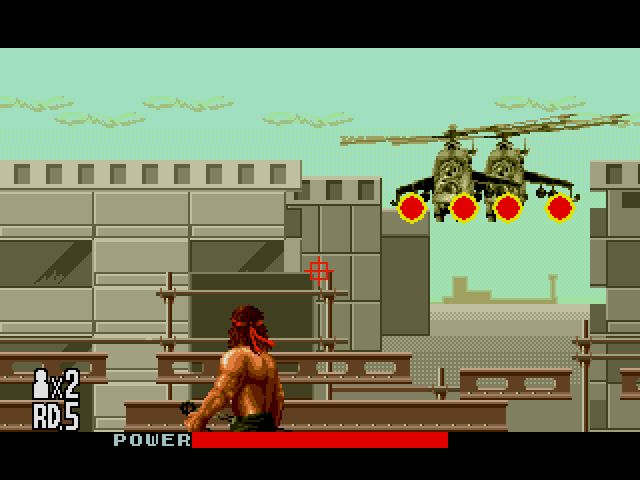 Rambo comes from an era where one man could take out an entire platoon of soldiers and it was still believable. This was the 80s, the king of the big dumb action movie and yet despite growing up during that period I have no fondness for the character of John Rambo. I’ll admit that might be due to the terrible, terrible NES game but I won’t let that color my opinion of Rambo III as it is a solid action game that is still compelling despite its age.

Considering the game is based on a movie it helps that the film’s plot is as video gamey as it gets. Colonel Sam Trautman is taken hostage in Afghanistan and John Rambo is enlisted to sneak behind enemy lines and mount a rescue mission. By himself. With nothing but a bow and some arrows, a knife, and a machine gun.

You could throw that premise in any game and it still works so of course numerous games were made based on the movie. Nearly every platform saw some version of Rambo III with the rail shooting arcade game being the most popular. It is this game that was ported to the various console and computer formats of the 80s to varying degrees of success which makes the overhead shooting action of this Genesis title an anomaly. For a launch title it is good but would soon be outclassed by better games such as Capcom’s Mercs.

By default Rambo is always equipped with an infinite machine gun and a knife with arrows and bombs in limited supply. The machine gun sprays in a random pattern unless you are moving which is actually pretty useful considering how often you are attacked from all sides. The composite bow has explosive arrows that can be charged up for more damage while explosives are timed. The arrows are incredibly powerful, able to plow through multiple enemies and tanks when fully charged. To be honest I didn’t find much use for the explosive. Anything a bomb can do the arrows can do far better without the seconds long delay

The knife would seem to be the odd man out but it has its purpose: you can only replenish arrows and bombs through melee kills as well as receiving the occasional 1-up. Getting in melee range is always a risky proposition as every soldier will stop moving and attack after a few seconds. It is rare to face a single soldier at once so chances are you’ll have to dodge a hail of gunfire after stabbing someone to death. If you spend the time in the first two levels stocking up it will last for the rest of the journey unless you truly suck at video games.

Aside from the weapons what really props up the game is its variety. Despite lasting a scant six missions nearly everyone tasks you with something different, be it finding a specific hostage and reaching the exit before time runs out or destroying a set number of ammo depots. I can appreciate the variety but some levels drag on a bit too long if you don’t know the exact level layout. If the game were one or two levels longer this would have been truly excellent as it has a solid foundation, silly controls aside.

Aside from the individual missions occasionally there are boss battles that take place in a third person perspective. Here you get to indulge in a movie style fantasy of taking out a helicopter or tank with nothing but a bow and arrows. The mechanics here are solid; the longer you wind up an arrow the more damage it will produce however you must remain stationary. That’s a bad move as your targets move significantly faster than you and you have little cover. These battles are fun if a bit gratuitous; let’s be honest they mainly serve as a means of showing off the system’s prowess.

I don’t fault the developers in that regard as the rest of the visual package is a bit lacking. Even as a launch title Rambo III isn’t a large step over later NES games such as Ikari III. The sprites are larger and pack more detail but overall the look is drab. This lies with the fault of the movie from which the game is based but maybe it’s asking a little too much for something more to spruce up the visuals. There are instances of heavy slowdown late in the game where the frame rate seems to hit the single digits which seems uncharacteristic for the system but this was one of its first titles so it is understandable.

Regardless of its staid presentation Rambo III is a good game that was one of the better Genesis launch titles simply by virtue of the fact that it wasn’t overly ambitious. Seeing as how you can find it dirt cheap it is more than worth the asking price.