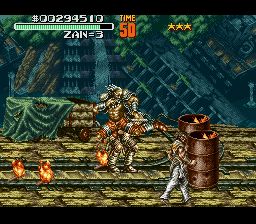 For as much as I associate Irem with shooters and R-Type specifically they released many arcade gems that I so desperately hoped would receive home ports. Blade Master, Gunforce 2, and especially Undercover Cops were all games that I loved in the arcade and the prospect of a SNES or Genesis port for any of these games was exciting. It was a sad day when the US release of Undercover Cops was cancelled but ultimately it didn’t matter; it’s not like beat em ups have stories worthy of Shakespeare after all so the language barrier is moot. This is one of the best brawlers for the Super NES and still worth tracking down today.

In the year 2043 nuclear war has ravaged the planet with roaming gangs becoming the norm as law enforcement could not keep up. The government creates a special squad of undercover cops to deal with the rising level of crime except these cops are special. With their skills in martial arts and street fighting Matt, Zan, and Rosa are the best chance to restore order to the city.

Although this is your standard beat em up this is not your typical Final Fight clone. While the protagonists neatly fit into their clichéd roles each is equipped with a larger than normal assortment of moves. In addition to the standard punch/kick combos there are numerous dashing attacks as well as throws and wrestling moves all accomplished using a simple three button setup. This has always been my biggest pet peeve regarding brawlers and the variety here keeps the game exciting from beginning to end. There aren’t too many weapons to pick up but the few available are pretty damn comical to see in action. Heaving a giant telephone pole out of the ground to use as a bludgeon is hilarious as it breaks down with every hit.

That last bit is part of what makes the game so charming. The game’s off beat sense of humor is one of its most endearing elements. We’ve all found it absurd that the heroes in these games eat freshly cooked chickens out of garbage cans but Undercover Cops goes one step further. You’re eating live pigs, chickens, snails, and even rats to regain health and must chase them down first. Pretty gross huh? Or how about the second level boss who midway through the fight bursts into tears at the beat down you’re delivering. Most of Rosa’s attacks are…..pretty provocative. Let’s just say the bad guys can probably die with a smile on their face and leave it at that.

If there is one crucial flaw the game suffers from it is pacing. After the initial outing each subsequent level is considerably longer and feels padded out by waves of enemies. While new antagonists are introduced on every stage the game does a fine job of making you sick of them by forcing you to fight them over and over in rapid succession. The game’s final two levels are a grueling gauntlet of every enemy you’ve ever faced one right after the other in groups of two –four. Not only is it incredibly cheap it’s also unfair; it’s almost as if the game is still designed around two players. Boss battles drag on the longest and there were even a few times where the clock almost ran out since your attack do so little damage. The pacing isn’t game breaking but I can definitely see many becoming frustrated by the end of the game.

Due to the lack of multiplayer the game becomes extremely after the first introductory level. There are some incredibly cheap enemies that are nearly impossible to defeat without taking damage. The bat wielding bastards are the bane of my life. Trying to conserve lives and continues for the game’s latter stages is hard as there are frequent instant death elements such as the compactor in stage one or the collapsing building in stage 2. The maximum five lives and continues evaporate pretty quickly and it will take some practice before you’ll see the end credits.

Despite the gap in hardware the developers have done an excellent job of recreating the arcade game’s graphics on the SNES. Some background details have been omitted here and there and a few enemies have been slightly redesigned but that aside it is remarkably close with the main difference being the resolution. Undercover Cops was created by many of the same artists who would eventually go on to form Nazca and create Metal Slug and that insane attention to detail is present here. The sprites are huge and well animated with the game only slowing down under the most extreme circumstances. The only negative would be the extreme palette swapping among enemies toward the end. The soundtrack is similarly excellent and full of jazz and techno tunes which I totally did not expect.

While the game is ultimately a bit short chances are you won’t see the ending right away. If the game had 2-player coop it would have been close to classic but will have to settle for being just excellent.