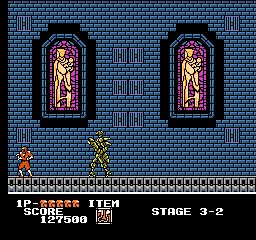 Words can’t describe how much I loved Ninja Gaiden growing up. Until the Revenge of Shinobi it was the quintessential ninja game in my opinion and so any game that even remotely seemed similar had my attention. As much as I craved a sequel (which would eventually come and was awesome) there is something to be said about being careful what you wish for as Ninja Crusaders, despite its similarities can’t hope to match up to Tecmo’s classic. It isn’t fair to make unwarranted comparisons but in this case it can’t be helped. This is not just a low budget ninja game but a bad game overall.

As much as I don’t want to make the comparison it can’t be helped: Ninja Crusaders looks and feels like a poor man’s Ninja Gaiden. Granted the NES was very limited in terms of sprite size and such but the similarities between both games’ protagonists can’t be denied. You aren’t fighting creatively designed ninjas this time however but aliens. Amorphous, ambiguous aliens whose designs make no sense though I suppose that is why they are alien. While they do look similar Ninja Crusaders does have a few features that distinguish it from the game that so clearly inspired it. For one a single hit means death, an aspect that is completely at odds with the way the game is designed but more on that later. There’s also two-player coop which goes some way toward making the later stages of the game bearable if you can make it that far.

Rather than a default sword + ninja magic the game has four weapons that you’ll pick up along the way. The four weapons available run the gamut of risk vs reward. The shuriken are your classic long distance weapon but are frustratingly weak. The Kusarigama has a nice balance between range and power. The spear is incredibly strong but has weak range and is essentially useless by the game’s midpoint. The sword would suffer a similar fate if not for the game’s other defining feature.

Depending on the weapon you can transform into a spirit animal and back again. Shuriken will transform you into a tiger with the highest leaping average and movement speed. The kusarigama changes you into a sea scorpion, which moves unbelievably slow on land but incredibly fast underwater, the spear becomes a bird that can fly indefinitely but cannot attack. Lastly the sword transforms you into an invincible dragon. The dragon is extremely overpowered, able to fly and kill even bosses in one hit. Of course finding a sword is extremely rare to balance this out and you lose it after one use. Sadly while the animal forms are cool they are underutilized; outside of the frequent trips underwater I’m sure most will even forget you can do it at all since it isn’t as integrated into the game as it should be.

Outside of the boss battles the game is fairly easy up until its final levels. Most enemies are spaced out pretty evenly throughout the levels and will rarely attack in groups of two or more. Despite the single hit deaths you’ll breeze through the levels and will have more trouble lining up jumps with the badly placed platforms than having to worry about some random alien.

It is in the game’s second half where it seems as though the designers had a spark of inspiration as the level design is noticeably better and the enemy placement becomes just as devious as Ninja Gaiden. Mind you that means its slightly above average but it will make you wish the entire production were this well thought out. Death comes pretty frequently at this point and the game leans heavily on your memorizing every enemy spawn point to survive as they are far too fast for you to react to. It feels incredibly cheap but luckily extra lives are easy to come by (just pick up the same weapon twice) and you have infinite continues which does alleviate the frustration somewhat.

Regardless of the weapon chosen the boss battles can be excruciatingly hard. It comes down to using the weak but long range Kusarigama which will drag the fight out or the stronger but close range tonfa, where every hit risks death. While I liked the challenge these mayors pose it is frustrating that their hit box isn’t always immediately obvious, especially the first boss. The final boss made me just as mad as the bastard at the end of Wrath of the Black Manta, another mediocre ninja game.

Take away Ninja Gaiden’s production values and nuanced gameplay and you are left with Ninja Crusaders, a game created in its image but lacking even a fraction of its charm. Those craving more action in the same style would be better served playing Vice: Project Doom, a similar title from the same publisher that is infinitely better than this.