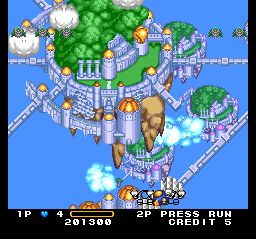 I love Detana!! Twinbee. Even I can’t believe I just typed those words. For the longest time I abhorred the Twinbee series but that was based solely on my dislike of the NES/Famicom games. Their hearts were in the right place but it was obvious the tech was holding the games back from truly being great. But with the release of the second arcade game that became a thing of the past as the visual evolution of the series gave it a new lease on life that would continue on down to the numerous games that would follow, from the beyond awesome Pop’n Twinbee to the weird RPGs. This PC engine port is another in a long line of exclusives that should have come to the US but with the advent of digital download services it is easier for fans of the genre to get ahold of this excellent classic

Twinbee and Winbee are on vacation when they receive a distress signal from the planet Meru. It seems the evil alien Iva has invaded and the Queen Melora needs their help. Detana!! Marks the debut of the actual pilots of both bee suits, Pastel and Light as well as the cast of characters that would eventually come to populate this universe. With the addition of artist Shuzilow Ha (a pseudonym) the series would finally adapt a visual identity of its own that would elevate it above the typical shooters of its day.

Detana!! Twinbee is commonly credited as the game that truly made the series explode and it’s easy to see why. With its distinctly anime inspired style the twin bee series would eventually go on to spawn a multimedia empire, spanning everything from a cartoon series, radio drama, and a boatload of merchandise. But all of that probably would not have happened if Detana Twinbee were a terrible game.

From a gameplay standpoint there are only a few slight additions. The multiple bell colors return and provide the same power-ups such as options, extra speed, a shield, and a wide shot. Two new bells have been added which will decrease your speed and provide new tail shield which will follow your ship. As in R-Type and Dragon Saber a powerful charged shot is available that is seriously overpowered. It takes less than two seconds to fully charge and is incredibly destructive, able to wreck bosses in as little as five hits. If you can find him Gwinbee will merge with your ship to provide even more firepower although you will really have to search to find him. Bombs also return and will auto target the closest enemy.

Playing Detana is more like going on a fantastical adventure than a random collection of levels. The cheery visual style is really unlike anything else out there as you fly over alien cities, mountains, and fortresses. There are far more moving parts in every level, be it mechanical devices or enemies that emerge from the ground. The game manages to almost perfectly balance its action between aerial enemies and ground based targets that can’t be ignored without dire consequences. Bombing enemies plays a much bigger role here as the fruit they drop awards extra points or you can even find extra lives or hidden weapons.

The difficulty is about perfect with a gradually climbing curve as you progress. The early Stages are flush with bells to juggle for power-ups. Enemies are less aggressive so that you can actually fully power up and pose little threat. At about the midpoint there is a noticeable shift as clouds become scarce and the screen becomes so chaotic juggling bells becomes an afterthought. While difficult the generous respawn system allows you to brute force your way through the game. Although only seven levels long you’ll enjoy every spent with the game.

While it isn’t perfect the PC engine conversion does an admirable job of duplicating the arcades visuals. Aside from the difference in resolution you would need both games side by side to notice the difference. 16-bit technology allows the artists vision to come to life as the game’s pastel visuals are a feast for the eyes. There is far more detail in the background and multiple layers of scrolling creating depth. The cast of bosses are all screen filling contraptions that often feature multiple phases before death. If you pay close attention there are many small details and animations that bring the world to life.

The soundtrack is fantastic, featuring a full range of happy tunes to match the cute visuals. This would mark the debut of future Castlevania composer Michiru Yamane and even here her range is apparent. It seems only fair that top class visuals should also be accompanied by an ace score and Konami delivered.

Detana!! Twinbee has been rereleased for a variety of platforms and for the small price you’ll pay an excellent shooter awaits. Even if you are tired of the genre Twinbee is unique enough to ensure that does not matter.