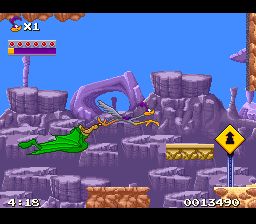 Once Sunsoft gained the Looney Tunes license we all knew the usual suspects would be first at bat in terms of videogame adaptations. Bugs Bunny and Daffy Duck starred in games of varying quality but it was the less famous of the bunch that would receive the most interesting titles. Taz-Mania used a unique perspective and was a fun if simple game. The Road Runner’s Death Valley Rally is interesting in that it manages to successfully capture the back and forth nature of the cartoon shorts but completely fail at everything else video game related.

Like the cartoons Wiley E. Coyote is on the Roadrunner’s trail in order to score a quick meal. The game is broken up into 5 main levels that are presented as episodes with 3 sub levels each and a boss battle. The object of each level is to simply reach the flag at the end, a task that is easier said than done as Wiley is there to harass you throughout each stage with some new contraption. Many of these will be familiar to anyone that has seen one of the shorts such as the bat suit, steamroller, and catapult. Since he is invincible Wiley has to be avoided at all times which becomes more difficult the deeper you progress. It’s an interesting take on a traditional platformer and one that mirrors the show, complete with each Acme gadget backfiring once you’ve completed a stage.

Aside from mirroring the content of the show the game does an excellent job of matching its look. The game uses large sprites that are full of personality and enriched by the system’s vivid color palette. Although the game takes place primarily in the desert they’ve done a good job varying the settings with an eventual mine and outer space (!) thrown in for visual diversity. The numerous sight gags involving Wiley’s devices failing have also been recreated pretty well. The only downside to the presentation is the repetitive music.

While comparisons to Sonic might seem apt aside from speed the two games have little in common. The Roadrunner completely relies on its speed to blaze through levels and has few offensive moves. Once you’ve built up speed coming to a sliding stop can take out weaker enemies and a quick press of the Y button enables a burst of speed like Sonic’s spin dash. Unlike that move however it is limited by energy. Pecking can be used to eat bird seed or attack enemies but is largely ineffectual. Honestly outside of boss battles what few enemies you’ll encounter can be avoided. The game’s focus is squarely on dashing through levels and collecting flags but it fails spectacularly in that regard.

You won’t find any loop de loops but there are plenty of nice long stretches and inclines where you can build speed and rocket forth in a blur. However the level design and enemy placement practically discourages it. Whether it’s the Coyote or some other obstacle nearly every attempt to simply enjoy the game’s speed is ground to a swift halt. That leaves a square focus on Mario style platforming and the game’s sloppy controls and collision detection weren’t built for that. The roadrunner moves to fast and is incredibly floaty; trying to navigate a series of narrow platforms is aggravating as a result and unfortunately that makes up the majority of the game. It’s as if the controls were designed for a completely different game and shoehorned in because they barely work.

As you can imagine the game is incredibly difficult as a result. Absolutely no one will complete these levels on their first try as there seem to be no rhyme or reason to object placement. Unless you’ve memorized each level completely you are going to smack into something at every turn and life restoring hearts are exceedingly rare. By the latter half of the game each stage is a massive labyrinth of recycled ramps and hills. Luckily the timer exists only to grant a point bonus since it would make the game impossible otherwise.

Wiley E. Coyote’s end level machines are big on the spectacle but it isn’t immediately obvious how to damage them no matter how long you stare at their blueprint. With limited continues I can see many being forced to start over trying to suss out their patterns if they even make it that far. Honestly I don’t even know why I soldiered my way through the game back in 1993 and I don’t have the excuse of no other games to play.

The developers managed to recreate the look and feel of the show pretty well but failed to provide any reason for you to want to do anything other than stare at it. Death Valley Rally is a bad game from start to finish and should be avoided.