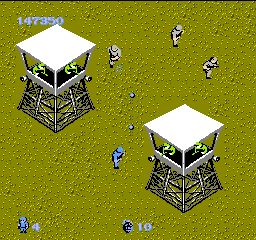 Although it was sheer coincidence that both the movie and Capcom’s arcade game Commando were released in the same window in my mind I can’t separate the two. Arnold Schwarzenegger was a brutal bad ass in the movie (I can’t believe I was allowed to watch it when I was 6 or 7!) and in some ways Super Joe in Commando is the same. While I was a mild fan of Commando back in the day I could still tell that it lacked in substance and was only a very brief distraction in the end.

While it has nothing to do with the movie you could certainly view it as an adaptation. After being dropped off in the jungle your single is to slaughter any and every one in your path on the way to destroying the enemy stronghold. Oh yeah you might also rescue a hostage or two. As one of the earliest overhead shooters Commando’s influence can’t be denied and can be seen in games as early as Ikari Warriors and later games such as Ninja Combat and Shock Troopers.

Because it was such a simple game Commando was ported to just about every format imaginable, from the Atari 2600 to the various PCs in Europe. The NES game adds a few features that are superfluous but unfortunately makes the same mistake as Ikari Warriors by dragging out the experience in order to see the true ending. Trust me it isn’t worth it.

It’s pretty impressive just how many sprites Capcom manages to fill the screen with no slowdown; as many as 8-13 gray and green soldiers will rush to assault you and the game action never misses a beat. Well rush probably isn’t the right word considering you are more likely to die from running into them than being shot. Once you move past them these lame duck soldiers can’t keep up and don’t even bother trying to shoot you in the back. Flicker will rear its head but that is usually only when motorcycles or trucks drive by.

In terms of weapons there aren’t any aside from your machine gun and limited supply of grenades. Luckily that’s more than enough to deal a swift death to any idiot dumb enough to cross your line of fire. Grenades can only be thrown forward but you can shoot in eight directions, although diagonal shots are tricky to line up. A few extra power-ups have been added although you’ll have to comb through the levels to find them. A bullet proof vest will allow you to survive an extra hit, an option for unlimited grenades, and glasses to find all of the hidden bunkers. The number of hidden areas was increased significantly for this release and make the grenades far more valuable than in the arcade release.

In the end all of the additional content does not change the fact that this is an arcade game, with levels that last about a minute or two before completion. With only four levels you’ll see all the game has to offer in ten minutes or so. In the arcade the popular Capcom tactic of making you play through the game twice to see the end was used but for the home release that was increased to four times with no discernible difference each time. It’s a far cry from what Micronics did with Ikari Warriors (adding three more excruciatingly long levels to the arcade’s one) but it makes little difference. Sure that still only amounts to less than an hour of work but as solid as the gameplay is it isn’t compelling enough to warrant doing so.

At the end of the day you can’t fault Commando for being what it is; a solid port of an arcade game. More advanced titles would soon follow such as Contra making the prospect of anyone wanting to revisit Commando slim, especially without two-player coop.