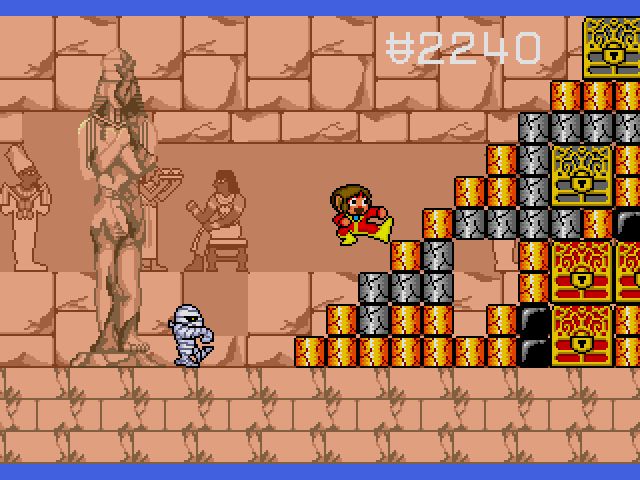 Sega Master System fans are intimately familiar with Alex Kidd, the Sega mascot who tried to carry the company to fame years before a certain blue hedgehog was born. Let’s not mince words, Alex Kidd was no substitute for Mario no matter how much you lied to yourself and tried to say otherwise. The monkey boy in a jump suit look was just not very appealing although being fair neither is a fat Italian in overalls. The games were not technically bad but far from the type of blockbusters that would make people buy the system in droves which is why the character was retired once Sonic came along. But not before he had one last 16-bit adventure under his belt.

Alex Kidd learns that his father King Thor is still alive and has been kidnapped on the planet Paperock so he sets out to save him. Alex Kidd in the Enchanted Castle is a return to the gameplay formula established in his initial outing. Although there were five total games in the arcade and for the Master System each was radically different and were of different genres. This is a straight platformer through and through and unfortunately not a very good one either. With its simplicity and floaty controls there isn’t much to endear anyone to the character and game. There’s a reason this game is all but forgotten and this was Alex Kidd’s final outing. There’s no spark of creativity that drives the game leaving it feeling like a soulless cash-in.

Alex is armed with his big hands and an unreliable jump kick for offense. There are a bunch of secondary items and vehicles that can be equipped which will grant you new abilities. The most prominent is the bracelet which grants a long range projectile attack. There’s also a motorcycle, pedicoptor, and even a pogo stick. These are only good for a single hit before they are lost but luckily you can stockpile them, not that the majority are worth a damn beyond acting as a shield.

The money dropped by enemies and found in chests is used to challenge the various denizens of Paperock to a game of Janken (rock, paper, scissors). Janken was one of the more unique elements of the older games and I’m glad it has made a comeback although it doesn’t feel very satisfying here. There are so many doors scattered about that you can easily cap out your list of items provided you have the gold. Although your opponents don’t have “tells” or patterns to their choices you can reasonably guess what they’ll pick and counter it. The only challenging round of Janken is against the final boss.

Unlike the buttery smooth controls of most platformers of the day Alex Kidd’s controls are very sloppy. Alex slides around like he is on ice skates which leads to many cheap deaths as he slips off platforms or into enemies. You still have a degree of control over his movements while airborne but it still feels floaty. The collision detection is spotty with the default punch and jump kick failing to register on a regular basis. That god damn jump kick. It activates randomly while leaping and is completely unreliable.

Despite the less than stellar controls the game is still incredibly easy. Even with one hit deaths I rarely ever died and only lost lives during the random games of rock, paper, and scissors. The difficulty picks up slightly towards with more aggressive enemies and a very frustrating pedicopter level but it’s nothing that platformer veterans will have trouble overcoming. Even accounting for the controls most will probably complete the game in a little over an hour with no incentive to go back.

The visual style is incredibly simple and feels like the older games except “grown” up. The sprites are much larger and more detailed. Each of the game’s eleven stages cover a variety of backdrops with few ever repeated. For a title released in 1990 it looks okay but even earlier launch window games such as Ghouls N Ghosts and Thunder Force 2 are much more visually exciting. The modest soundtrack actually contains a few jingles that are memorable although these standout tracks are few in number.

The best way to describe Alex Kidd in the Enchanted Castle is that it is an average game in an average series. Few remember the character at this point and when looking at his games it is easy to see why. There are far too many excellent platformers for the Genesis to bother with this one.