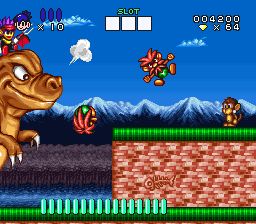 I loved Joe & Mac, both in the arcade and at home. I wasn’t too fond of the many caveman platformers that seemed to spring up out of nowhere back in the day but I’ll tell you one thing, Joe & Mac was far better than pap like Chuck Rock. A sequel was inevitable but would skip the arcade and debut as an SNES exclusive although most Americans would be completely unaware of this. Congo’s Caper was vastly different from its predecessor and unfortunately it went the way of a generic platformer rather than the interesting action of the first game.

The game’s story is certainly not traditional. Congo and his girlfriend Congette are a monkey couple who come into contact with a mysterious jewel that transforms them into cavemen. Before they can comprehend just what the hell has happened a devil kidnaps Congette, starting our adventure. Yes, a devil during prehistoric times. It’s so absurd it’s downright hilarious.

While this is technically the second game in the series it is a far different beast in terms of gameplay. For one there is no life bar. If you take a hit Congo devolves back into a monkey with shorter reach less and jumping power with a second touch resulting in death.   There are plenty of orbs lying around that will change you back so that it isn’t much of an issue. Collecting three orbs without being hit will transform you into Super Congo, who is the prehistoric equivalent of Superman. Super Congo is able to leap the tallest platforms in a single bound and can sustain three hits before reverting back to normal and as a bonus this mode persists from one level to the next. Sadly there are no extra weapons meaning you’ll have to make do with the lame ass club for the length of the entire game. Being forced into melee combat is certainly different but I don’t know if I would say it is better.

The level design is the weakest area in the game. For the most part the game does a good job of avoiding the stereotypical platforming tropes of an ice level, fire level, etc. and instead sticks pretty closely to its prehistoric theme although it does take a turn for the weird as you visit a pirate ship and a haunted house. The problem is everything done in Congo’s caper was done better in Joe & Mac. Dinosaur chases, battles against oversized tyrannosaurs, even exploring the insides of a beasts stomach, it has all been done already and much better. There’s a decided lack of inspiration that makes the game feel average above all else as you are simply going through the motions established by better games.

It is quite clear that this is a game aimed at children as extra lives rain down from the sky like candy. Items that activate the roulette wheel for extra lives are frequent and even the bosses drop diamonds worth a few. Speaking of which, the only real challenge in the game comes from the boss battles. But in all honestly they are more of an endurance test than a skill check. Their life bars are pretty long and at most you can get off two hits in succession meaning you’ll have to cycle through their few tired mechanics over and over to whittle them down. It turns what should be a highlight of the game into a boring and repetitive exercise, one that you’ll dread when the time comes.

The sparse presentation of Congo’s Caper is in contrast to the vibrant and detailed world of Joe & Mac. It isn’t fair to compare the two necessarily but CC is part of the series, albeit tangentially. The backgrounds are incredibly barren despite the setting with the game sporting a more cartoony art style. Having said that it pales in comparison to Joe & Mac, which does owe a lot of its graphical prowess to the fact that it was originally an arcade game. After seeing the level of detail in the SNES and Genesis ports of that game Congo’s Caper can’t help but feel lacking in comparison.

One area in which the game does excel is the music. The soundtrack is fantastic all around and full of tunes that would almost seem more at home in an RPG than a platformer. While generally excellent the music is recycled heavily throughout the game.

Congo’s Caper is an inoffensive platformer that seems more geared toward the younger set but even when taking that into consideration it can’t escape being an average game. Although it isn’t necessarily a direct sequel to Joe & Mac it does still pale in comparison to that game and when you can simply play that instead the question becomes why bother?