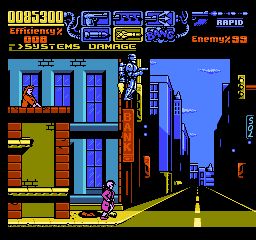 I have to give Ocean credit, they certainly tried with the Robocop license. Data East’s Nes game based on the first film was decent but flawed but Ocean’s first stab at this license was a complete disaster which is saying a lot considering how bad the movie is. Sadly Robocop 3 follows along the same lines despite trying to add some unique flavor to what is otherwise a traditional side scrolling action game. This is not worth the hefty investment.

The most immediate change is visual; this third installment has gone back to the grittier look of the first game rather than the clown colored presentation of the dire second game. It doesn’t stray too far from it however as there are still very garish color choices throughout but that is owed more to the system’s limited color palette than anything. Murphy himself looks a bit chunky and cartoon like though I suppose that is keeping in line with the rest of the presentation. Unfortunately the music is terrible, full of the generic euro techno trash that Ocean tended to populate their games with.

Uneven presentation aside at the very least the mistakes made with the second game’s controls have been fixed. Robocop does not slide around like he’s on ice skates and that change makes the game infinitely more playable. He isn’t as spry in his steps since there is a sense of mass but it is manageable. The ability to aim diagonally is a blessing with regards to dealing with enemies although I find it suspect that you can’t shoot directly upward. Robocop is armed with a large variety of weapons, from spread shots to different varieties of missiles, all equipped with infinite ammo. You even get to don the film’s jet pack for no inexplicable reason in one level that is more frustrating than fun. You can’t say they didn’t at least try to include some of the film’s more iconic elements.

The game introduces what should have been an interesting mechanic that in some alternate universe would have given it “depth” but in practice is more frustrating than it should be. Robocop’s body parts have separate damage ratings that when depleted will cause that part to randomly malfunction. If your arms are damaged your weapons fire is erratic and sometimes won’t work at all. When your legs are damaged you won’t be able to jump temporarily; if you’re body suffers too much damage occasionally Robocop will be completely immobilized. What ruins it is the scarcity of repair items. At the end of each level you’ll have to use repair canisters to patch him up but at most you’ll have 3 or 4 which isn’t enough to completely fix one limb let alone his whole body.

Because of the screwed up repair system the game’s difficulty is all over the place. When all of Robocop’s parts are working correctly you can breeze through the game fairly quickly. Unfortunately that is a rare occurrence. Because repair items are so rare you’ll always have to deal with some part of his body being broken and the myriad frustrations that causes. At its slightest you will be unable to shoot; switching weapons will fix it. At its worst you will be completely immobilized and unable to jump which will basically forces you to die and continue. The only saving grace (if you can call it that) is the game’s brevity. With a sparse five levels the more determined can finish this in a little over an hour. But why would you?

Although the movie was a mess the sad thing is this game had the chance to be good! If they had ditched the stupid repair system the game would have at least been bearable. I’m not trying to paint the picture of an awesome Contra level run and gun action game hidden beneath busted mechanics but at least the few remaining fans of Robocop in 1992 could have had a decent game to make up for the movie’s shortcomings. Oh well.

Robocop 3 is slightly better than the terrible second game but still not worth tracking down. Because of its late release the game is sometimes pricey. Ocean never had a good reputation for quality when it came to their licensed titles and this certainly didn’t do them any favors. This belongs in the same pile as Akklaim’s X-Men and Sony’s Last Action Hero.