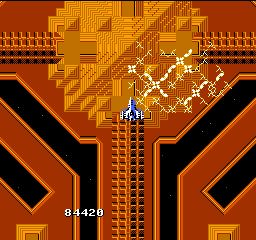 Going to Sears and Toys R Us to buy new games in the mid to late 80s was practically a religious experience growing up. Video game magazines were still in their nascent stages if they even existed at all so perusing the back of the box was still enough to get excited. Occasionally however there was always that game that seemed like it would be awesome but left you with nothing but crushing disappointment after you’d endured the 30 minute/car bus ride home. Alpha Mission was one such disappointment and is definitely a product of its time.

Originally released in the arcade in 1985 Alpha Mission bears more than a few similarities to Xevious. There are a mix of air and ground targets that need to be destroyed and it also shares a similar graphical style. Alpha Mission comes from that old school mentality of trying to attain the highest score possible as there is no definitive end to the game; once you’ve beaten the equivalent of a final boss the game simply loops back to the first level. There’s nothing wrong with that except the game needs to be compelling enough for you to even bother completing the first loop which AM isn’t.

I freely admit part of my disillusionment with Alpha Missions stems from the fact that I played it after Gradius. While it wasn’t the greatest game in the world Gradius represented a significant step in the evolution of the shooter and going back to something so quaint in comparison is a bitter pill to swallow. SNK would eventually find their “voice” for a lack of a better term on the NES with games like Guerilla War and Crystalis but until then we had to endure crap like Ikari Warriors, Athena, and this. Like 1942 I can respect a game that was probably exceptional at release but find little reason to revisit it today.

The standard cannon isn’t very powerful but is more or less functional with your slower missiles reserved for ground targets. These aren’t simply enemies; there are a ton of background objects that can be bombed to reveal any number of power-ups. The most important would be E for energy which is what powers your secondary weapons. There’s a plethora of shooter staples present, from the Sheeld (SNK Engrish dating all the way back to the 80s holy crap), homing shot, thunder, and octo. The more powerful the armament the more energy it uses. There’s a bit of an oddity when selecting a weapon in that the game resets back to a few seconds ago, even in boss battles.

The game has a nasty side in the form of power downs that will affect you in different ways, all denoted by backwards letters. The reverse energy will sap your energy reserves while the reverse K will take all of it away. There’s even one that will set you back a third of the way through a level. For the most part these items are easy to spot but in the heat of the moment it’s easy to make a mistake and have to retread prior ground. The worst item will completely strip you down to the equivalent of a newborn baby at which point you’re going to die in seconds.

Even with these negative items the game is fairly easy. Most levels last a little over a minute and most enemy waves are so sedate that you can see them coming a mile away. The warp item appears on a regular basis meaning you’ll bypass a good portion of the already short levels. The bosses put up a little more fight but considering the game’s 1987 release you’ve more than likely faced tougher. Once you’ve completed the sixth level the game loops and might be slightly harder; I wouldn’t know because I wasn’t paying attention nor cared.

In 1987 there was some choice in NES shooters with the likes of Zanac, Stinger, and of course Gradius; all superior alternatives to Alpha Mission’s relative mediocrity.