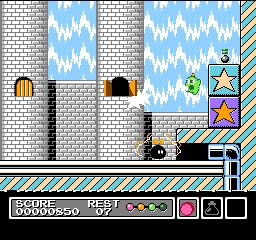 Sunsoft continually raised the bar as to what was technically possible on the NES with all of their work seemingly culminating in Batman: Revenge of the Joker. But as brilliant as that game is graphically there was one other unknown Sunsoft gem that can compete in a different sense. Gimmick! was once scheduled for a worldwide release but cancelled, which is unfortunate as gamers missed out on a truly unique game for the time. While its execution isn’t completely flawless there is still plenty to love in this criminally overlooked classic.

At first glance Gimmick! resembles an even cuter version of Kirby but the gameplay is as far to the left as possible. Yumetaro’s only means of offense is his star attack. By holding B you will charge up his star which can be unleashed as a bouncing projectile. Although this is your only attack the star has plenty of functions. Aside from bouncing along the ground it will rebound off walls and can be used as a makeshift platform. There are a few bottles that alter its properties to that of flame or a bomb but they aren’t in great supply so you’ll spend the majority of the game with the default star. It’s definitely not easy to get the hang of and this is what will turn off most since the game has no real learning period.

But those that stick with it will be graced with some of the most unique gameplay in an 8-bit platformer. The game’s physics are far more advanced than any game of that generation and are a joy to play around with. Your star attacks are affected by the physics; releasing a star from a large height will cause it to bounce higher. Depending on the walls and obstacles it hits it will also move faster and actually slide along a surface realistically. Slopes and inclines also affect everything, from your stars to the enemies as well. It is both terrifying and hilarious when you think you’ve gotten away from a particularly troublesome foe only to see it slide down a hill, build momentum and leap at you with its accumulated speed.

All of these aspects play a role in the game’s meticulous level design.   Every platform and slope is placed there for a reason, even if it isn’t immediately obvious. Although there are only six levels each is relatively huge and full of secrets and sometimes more than one path to its conclusion. Since there is no time limit it frees you up to explore every nook and cranny; chances are if you see what looks like an unreachable platform there is something there, it’s just a matter of how to get there.

The excellent level design does its best to mask the Jekyll and Hide nature of the game. At its best moments the game is insanely fun. Just the simple act of sliding around with 3 or four enemies following close behind and keeping pace due to the game’s physics is incredibly fun to see in action even if it usually ends in death. The times where you’ll randomly happen to land on one of your rebounding stars and ride it through a particularly rough segment are awesome. But these are underscored by bad enemy placement and traps, the kind where a cheap hit is unavoidable. This is perfectly embodied in the stage five boss. Here you have to time the angle and trajectory of your stars to properly reach it, something no other game at the time even attempted. But this is just the opening salvo in a grueling three stage boss battle, one that doesn’t pull any punches and can quickly sap your lives and continues.

If it isn’t already apparent this is an incredibly difficult game. The enemies are incredibly aggressive and will rarely stop their pursuit unless impeded. The charge time on your star attack isn’t so bad but you are helpless until it disappears which can be a killer. Extra lives aren’t rare but you’ll have to survive long enough to find them. You only have three continues to see this through to its conclusion which will take a few days for most gamers I imagine. You’ll definitely get your money’s worth out of this.

Speaking of which as if the game wasn’t hard enough to see its true conclusion requires a level of skill that I don’t think most can muster. In each stage is a hidden item that is needed reach the seventh and final stage. Not only do you need to find these thoroughly hidden items you have to collect all of them without continuing, otherwise the game ends after the sixth boss. Between the aggressive enemies, interesting but frustrating physics engine, and suspect enemy placement not many will have the patience or fortitude to replay the game and memorize every aspect it in order to meet those insane requirements.

Gimmick has a clean visual style that is highly reminiscent of Super Mario Brothers 3 and Mega man yet still feels uniquely its own. The visuals are bright and colorful yet can still evoke a darker tone when necessary. The animation in particular is incredibly well done for an 8-bit game even if the enemies are a bit generic. Where the game truly excels however is in its sound. The game uses a custom chip that added three more sound channels to the NES, enabling one of the richest and varied soundtracks for the system. This is one of the best soundtracks ever produced for the console bar none.

Though the game is slightly flawed Gimmick! hits enough high points that the extreme difficulty isn’t as much of a deterrent as it should be. If you are in the market for something different Gimmick! will scratch that itch, just be prepared to pay an arm and a leg as it is incredibly rare.