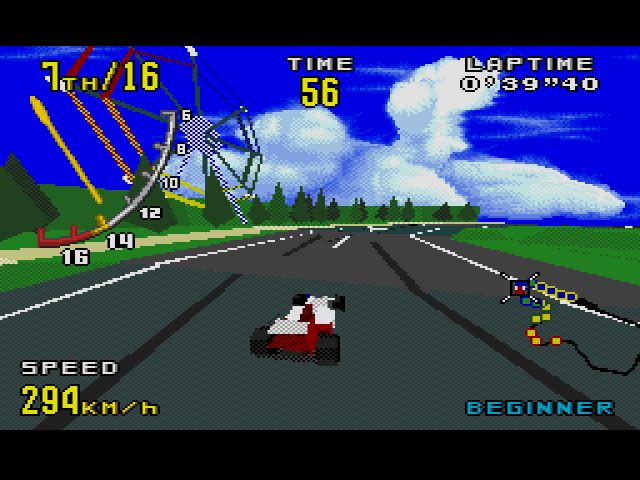 As early as the beginning of the 90s it was obvious that 3d and polygons were the future of the industry and Sega were one of the main players pushing technology forward with their big budget arcade titles. Virtua Racing was not the first 3d racing game but it is probably the most important. The relative complexity of the game in terms of its visuals and handling compared to earlier efforts like Hard Driving was simply astounding and really drove home the idea that this was the future. All hope of a home port seemed to rest on the Saturn until Sega created the Sega Virtua Processor, which much like the Super FX chip allowed the Genesis to output polygons. The Genesis port of Virtua Racing is an admirable attempt at capturing what made the arcade game so special that is ultimately let down by its lack of content and exorbitant price.

It is immediately apparent that the SVP is a technological wonder as the game is incredibly fast. While not at the level of its arcade big brother the game moves at a consistently high frame rate (for the time anyway) that makes Stunt Race FX look embarrassing. It should be noted that it did come with a high cost, literally. The SVP was incredibly expensive to manufacture and the cost was passed on to consumers as the game cost $100 at launch.

I like Virtua Racing and all but that was a damn rip off. Those of us that grew up during the 8 and 16-bit era probably paid $70 or $80 for fighting games and RPGs but those genres are giving you tens of hours of content. VR has 3 tracks and a free run mode. No matter how well the conversion turned out it wasn’t worth that price and consumers agreed as this was the lone title to use the SVP which in hindsight was probably wise as the 32X and Saturn would soon launch, killing the novelty of its innovation.

Once you hit the track there’s a lot to like about this version of the game. I’ve already mentioned the speed but the handling is also well done. The arcade’s four camera angles have been retained although I found the first person view and the high angle camera to be useless and more of a novelty. Despite its brevity this is an incredibly tough game with very little margin for error. Even slightly clipping a competitor at a decent speed will send your car flipping or into a 360 spin out. During the first lap it’s possible to mount a comeback but anything past lap 3 will relegate you 7th place or lower guaranteed. Its soul crushing to have a near perfect run demolished by one random screw up. Free run mode is there for a reason, use it.

No matter how well designed the courses are and tight the controls Virtua Racing still can’t get around the fact that there is very little content. Three tracks and a 2-player mode is not enough to justify that hefty price tag, especially when compared to other racing games of that era like Top Gear and Rock N’ Roll Racing. It will take some time to truly master the courses on offer but once that is done you’ll find very little reason to revisit the game. As an arcade game it works perfectly, as a home release it is a bad value proposition.

Back in 1994 Virtua Racing was a technical achievement but even then the presentation still had issues. The system’s low color palette simply wasn’t up to the task of replicating the bright visuals of the arcade machine and gives the game a very grainy and dithered look. Objects tend to blend together when viewed from a distance due to the low color palette and jagged polygons. This is most notable with the drone cars which leads to many an unfortunate collision. The draw distance is low with major track elements popping up a few feet away depending on the course. I’ve ripped on the graphics pretty hard but these are all factors that need to be taken into account once the game begins. There is a certain amount of adjustment required to enjoy the game but once you do it is possible to appreciate the fact that they were even able to make an actual playable version of the game for such old hardware.

Curiously there is very little music in the game. At the start of each race and beginning of a new lap a brief 5 second jingle will play but aside from the attract mode and menu tunes that is all. It reminds me of older arcade games from the early 80s in that regard. You’re left to listen to the engine sounds, sound effects, and announcer which makes the game feel a bit empty.

When compared to the rest of the racing library on the Genesis Virtua Racing is far better than most. But this version of the game was made obsolete in short order by the 32X and especially Saturn editions with their vastly expanded content. This is still a good game and it can be found dirt cheap now but I would still say you’re better off finding one of the other versions of the game.