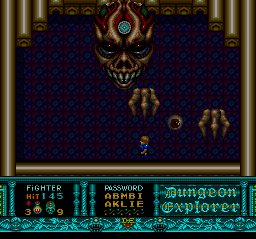 If you were a Turbo Grafx-16 fan and also liked RPGs the pickings were incredibly slim unless you owned the CD add-on. And even then it wasn’t much better. Seeing as how most of us weren’t old enough to hold down a job there weren’t many who had a Turbo CD, with the sales number bearing that out. The meager selection available on HuCards in the US meant the games were highly scrutinized and under close inspection Dungeon Explorer is only an average title. Beggars can’t be choosers and all but sometimes it is better to go without.

Long ago an alien race invaded the land of Odessia and wrested control. The King had the Ora Stone hidden for protection and now its power to bring light, life, and happiness is needed. As an unnamed warrior summoned by the King it is your job to find the Ora Stone and bring peace to the land by vanquishing the alien King Natas (not the least bit subtle there).

You have a choice from a wide range of character classes: Fighter, Thief, Warlock, Witch, Bard, Bishop, Elf and Knome with a further two unlockable. All combat is projectile based but each class differs in many ways. Some like the Thief have faster attacks but are weak. Some are resistant to poison while others move extremely fast. Each favors a different stat out of the 4 but the main differentiator comes in the use of White and Black magic. The two spells each class is given are wildly diverse with some favoring multiplayer and others being completely useless, like the Bard’s ability to change the music.

The game can be played by up to five players simultaneously which I’m sure most sure as hell never had the chance to experience back in the day. Not only was the turbo tap needed for even 2-player coop but seriously who even knew five people with a Turbo Grafx-16? Of the hundreds of people I met in Middle and High School I knew a grand total of 2. That isn’t an obstacle now of course but the system’s lack of accommodation for even basic multiplayer cannot be overstated.

Dungeon Explorer has more in common with Gauntlet than traditional action RPGs except with more variety. Demons stream in infinitely from monster generators that must be destroyed. Rather than one lone dungeon separated into a mass of floors you explore all of Odessia with many different towers and caves to explore. Aside from increasing your stats there are numerous items that temporarily increase your powers or grant new abilities like repulsing enemies or a reflecting shot.

What few RPG elements that are present are minimal at best. There is no experience point system in the game with all levels earned after defeating a boss. The crystals dropped will give a massive boost to your hit points and cycle through a few colors that correspond to your stats, allowing you to control how to build your character. You can shore up a given hero’s weakness in a particular category such as speed but I imagine most will double down at what each class excels at.

Dungeon Explorer isn’t a long game by any means and at most will take a few hours to complete. Most dungeons and castles are only a few short floors long with the only challenge coming from the abundance of monster generators and the end level bosses. The layouts are pretty straightforward up until the final few which introduce more maze like design. Had the majority of the game shown the spark exhibited in the last few areas they wouldn’t be such a slog to trudge through despite their brevity.

This was not a pretty game even at its release and time has only made the graphics uglier. The entire game world is exceptionally dark and murky with little detail or interesting background elements to look at. Aside from the bosses all sprites are incredibly small which makes sense as there can be up to 50-60 enemies on screen at once if you aren’t paying attention. The bosses are the lone highlight with some interesting designs although these encounters are all too brief. The music is incredibly grating and prompted me to listen to my own instead.

RPG fans of the Turbo would be better served going with Neutopia rather than this. Although it is derivative of Zelda to the point of almost plagiarism it is still a decent game and far more engrossing than this mediocre title.