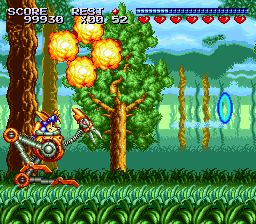 Konami’s Rocket Knight Adventures was one of the few mascot platformers to truly bring something new to the table back in 1993 and was able to rise above the sheer overload of terrible, generic platformers to achieve greatness. In a year filled with numerous excellent Genesis titles such as Ecco the Dolphin, Gunstar Heroes, and Shinobi III it still managed to stand out so it should come as no surprise that a sequel would appear the following year.

However this time both the SNES and Genesis would get a piece of the action in two completely separate games. While his Sega outing would carry the moniker Rocket Knight Adventures 2 the SNES game is actually closer in style to the splendid first outing. While the Super Nintendo game is accepted as the superior game both are great titles and you won’t lose out either way.

The kingdom of Eginasem has enjoyed a period of peace but is now beset by Generalisissmo Lioness and her wolf brigade. As if this threat weren’t enough Sparkster’s rival Axle Gear is working with them and kidnapped the Princess Flora as well. Now Sparkster must singlehandedly fight these forces to save Eginasem from a potential nuclear (!) attack.

Sparkster returns largely unchanged from his last outing. The sword can fire long range beams of fire and the sole addition to your offense comes in the form of a spinning slash that can be chained together multiple times. It seems trivial at first but is a game changer in a few ways. With careful timing you can completely slash through an enemy and avoid a hit but more importantly it can be used to change direction in the middle of a rocket burst or slow your descent. Veterans of the first game will remember that after a rocket burst Sparkster would drop like a flailing mess; not so here.

Of course the rocket pack is the real star of the show and remains just as fun a mechanic as the first time around. It only takes a second or so to build up a full charge at which point it can be utilized in a number of ways. Whether it’s flying through the air or as a means of attack next to Super Joe’s arm in Bionic Commando this might be one of my favorite play mechanics. There was some trepidation as to whether or not the SNES could keep up with the fast paced action that was established in the first game but those fears can be put to rest. At times the game seems to move too fast but that is hardly a complaint.

The best gameplay “hook” in the world is nothing without excellent levels to support it and in that regard Sparkster has it in spades. The levels are a lot more open with large vertical spaces to give you more room to play around with the jet pack. When you do find yourself in a tight space it’s usually because the game is about to throw in some hazard that you must avoid or face instant death such as crushing water or a collapsing ceiling.

There’s a great deal of variety from one level to the next. Stage three takes place on the back of a bird like robot who hauls ass at neck breaking speed, leaving you to try to keep up with the constant flow of enemies that appear. The pyramid features shifting walls underground and a big open desert on its surface with both featuring their own set of problems. You’ll even take to the skies in a shooting level reminiscent of Pop n Twinbee which ends in a duel with Axle Gear. Though there are less auto scrolling segments than in the prior installment this single level is more refined.

This is a fairly balanced game on normal and this time around there are passwords to chart your progress. But just like the original to see the true ending you’ll have to finish the game on hard as it unlocks the true final level. Trust me this is no small task as continues are extremely limited. At nine levels long you definitely have your work cut out but the game remains fun regardless of the difficulty level.

Konami were at the top of their game towards the end of the 16-bit era so it should come as no surprise that Sparkster is a beautiful piece of work. The SNES’s larger color palette has done wonders for giving the world a richer look with some breathtaking backdrops that grab your attention. To a certain extent I do kind of miss the dark and harsher look of the first game but when you see a level like the pyramids that has up to eight layers of scrolling it’s a worthwhile tradeoff. The sprites are noticeably larger than in its Sega counterpart making the intricate animation work stand out that much more.

It’s a god damn shame that Sparkster went unnoticed as it was one of the few bright stars during a dark period in platforming history. Because of its lack of success the series would lay dormant until 2010 when it received a next generation remake. Decent game, but it lacked the heart and soul of this truly excellent slice of gaming nirvana. Sparkster has more depth than many of its competitors combined and will provide many hours of entertainment for those gracious enough to pick it up.