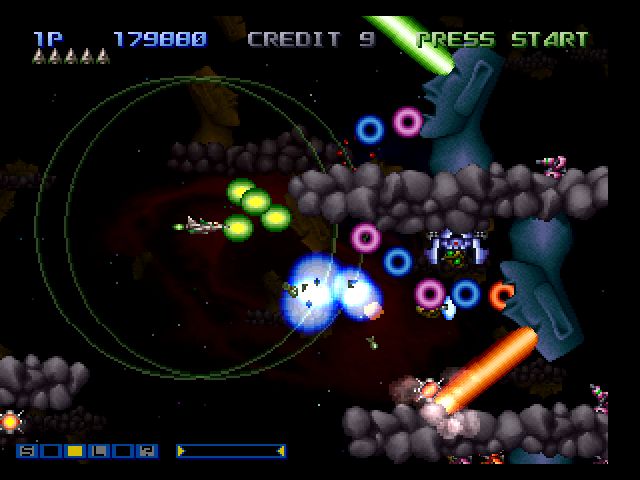 I’ll always lament the death of the shmup in the transition to 3d. There were still a few released in the US thanks to Working Designs and their Spaz label but the truly exceptional games in the genre were left to become high priced imports. Honestly I could see it coming; dear god were the Genesis,Turbo Grafx-16 and especially the arcade overrun with these games and as much as I like a nice shooter I doubt they were that popular. You know things are bad when Konami decides it isn’t worth it to bring a Gradius game to the US when no localization is required. We missed out on one of the best shooters of all time however as Gradius Gaiden is brilliant and I’m here to tell you why.

The traditional power-up system of the series returns with some smaller tweaks added such as powering up all offensive weapons twice, giving you a reason to collect those extra power capsules. You also have a choice between four different shields although some (Limit) sound cooler than they are in practice. What has changed is that rather than the full on Edit Mode of the prior game Gradius Gaiden instead offers four ships with preset weapon configurations. It’s a large blow to be sure as the wealth of options the Edit Mode presented was part of what made Gradius III so fun however the differences in each of the ships makes up for it slightly.

The Vic Viper retains the classic weapon lineup of missiles, and a double shot. The Lord British represents Salamander and comes equipped with two-way missiles, the Ripple, and a piercing laser called the Disruptor. The new kids on the block come with a few weapons brand new to the series that in some cases will change your approach. My personal favorite the Jade Knight is well rounded and comes decked out with a spread bomb, twin laser, and the Round Laser. The round laser pulses like an echo around the ship which is different but extremely effective in tight spaces. The Falchion β is not for beginners as its weapons take some getting used to. The rolling missiles split in two directions when they hit the ground, the Auto Aiming weapon actually doesn’t home in on its targets but instead fires a second shot anywhere between its 90 degree radius. The gravity bullet creates miniature black holes and is awesome.

While the Edit Mode from Gradius III is missed what is literally a game changer is the gauge edit. After selecting your ship and shield you can rearrange the order of the power-up bar as you see fit which is huge. You can make the shield and options the first two in the gauge and only cost one or two power capsules which is nuts. With this you can power-up relatively quickly if you are smart about it but the real benefit of editing the gauge is being able to mount a comeback after death. You will die frequently in this game with checkpoints located in really bad spots. It’s not uncommon for the series and is usually a hopeless situation as it takes too long to amass a decent amount of power. Now however dying against a boss isn’t so disheartening since you can actually fight back.

The game’s nine stages avoid the standard video game tropes with some truly original levels thrown in the mix. The giant crystals of stage three will reflect certain lasers which can be used to your advantage. The organic fortress of stage 5 pulses and changes shape as you progress like a living organism. My favorite level is stage 7 which is slowly being pulled into a black hole. Background elements are constantly pulled in and spit out and it makes excellent use of scaling effects to make it all the more convincing. There are recurring elements thrown in with a twist such as the boss rush and requisite Moai head level but you’ll be shocked to see them spit massive beams of destruction, sometimes even as they crumble!

The game is still just as difficult as its arcade brethren however I found it more manageable than in prior installments. Now it could just be the fact that I’m a Gradius veteran but in actuality I feel the game is simply better balanced. Power-up capsules are in greater supply and if you are smart about editing the weapon gauge you can reach near full power in less than a minute. Its power you’ll need as there is simply more of everything, more enemies, more indestructible objects, and especially more bullets. The bullet patterns don’t come anywhere near the insanity of later shooters of that era but it does become pretty manic every few seconds. Where the bullets are easy to see many bosses also release little bits of shrapnel that blend into the space dust in the background which will lead to many a cheap death but that is about the only negative I can think of when it comes to the game’s challenge.

Gradius Gaiden combines intricate sprite work with the occasional polygonal element to create a look not too far removed from the rest of the series. The artwork in the game is top notch with beautiful backdrops and larger enemies than before. The game manages to avoid all of the typical video game clichés when it comes to thematic levels and the few that are reminiscent of the past still feel unique. The game’s 3d elements are kept minimal thankfully, mostly reserved for scaling enemies and the occasional background element. The one negative I guess I can point out is that certain larger enemies tend to be pixelated, as if they were drawn smaller and scaled up. The rest of the visual package is so spectacular that this is almost irrelevant in my opinion.

Next to Gradius V this is the best game in the series and one of my favorite shooters of all time. The only US release came as part of the Gradius Collection for PSP which might be hard to find now but well worth the investment. Shooters rarely are better than this.