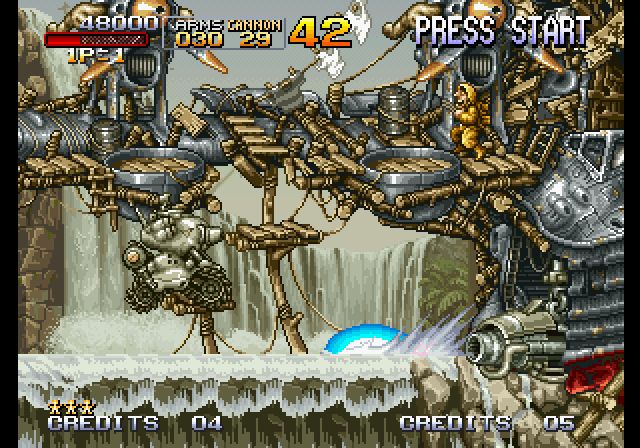 Does anyone remember Cyber Lip? It was the pack in game for the Neo Geo and let me tell you it had nothing on Contra. For the price you were paying for the system they really could have packed in a better game to show off the hardware. Now if Metal Slug was that game, oh man, I imagine legions of preteens holding their parents at knife point in hopes of getting a Neo Geo. Metal Slug was a breath of fresh air among a fighting game and shooter heavy lineup and this Saturn port is pretty much arcade perfect thanks to the required 1 meg RAM cart.

Like any good shooter Metal Slug is packed with numerous weapons of mass destruction. The most common is the heavy machine gun, which spits bullets at a rapid fire pace in 64 directions. The rocket launcher is the most powerful by far but is has the least ammo while the shotgun isn’t too far behind but appears less frequently. My personal favorite is the flame thrower, which flambés multiple bad guys in one shot. Weapon drops are pretty constant whether it’s from some ruined background element or a hostage awarding it as thanks. It’s a wise decision as the game would be impossible if you had to rely on the standard pistol for too long.

The metal slug in the title refers to the bad ass armored tank that shows up in almost every level that can be ridden to cause mass havoc. Its Vulcan cannon comes with infinite ammo and a powerful artillery shells that can trivialize some boss encounters. It runs on gas that can be replenished but if you take advantage of the brief moment of invulnerability when exiting (hint, hint) you can pretty much avoid all damage and breeze through even the roughest sections of the game.

Compared to later installments in the series this first game seems pretty restrained in comparison. It has its moments of sheer chaos however outside of the occasional slowdown (which was present in the original) it isn’t that far above the 16-bit Contra games. The sheer spectacle of it all can be overwhelming but once you adjust you’ll find a game that despite its gore actually doesn’t take itself too seriously. There are moments of hilarity throughout such as innocent civilians taking a bath while you blow up their house or interrupting enemy soldiers roasting marshmallows over a fire. Its these little touches that give the game personality and SNK/Nazca would further expand on this in future games.

Metal Slug can be a tough beast to conquer as the sheer chaos at times can be hard to follow. You can set the starting number of lives but continues are limited and I’m pretty sure most will burn through them halfway through the game. However this Saturn edition allows you to pick a level among any you’ve conquered once you have exhausted your continues, all with a new stock of credits. Unfortunately this is a pretty short game at six stages so even novice gamers can brute force their way through it in about two hours. As a bonus this version includes an art gallery and the combat school from the Neo Geo CD which is a bunch of missions that challenge you to complete prior stages under certain conditions. It’s definitely fun but limited; Soul Edge did it better.

The main reason you will keep returning to the game will be the graphics. Anyone familiar with In the Hunt, Undercover Cops, and Gunforce II will recognize the art style used in the game as they were all made by the same staff. There is an exquisite attention to detail in even the smallest of background elements that borders on insanity. Destroying buildings and other fortifications will shower the screen in debris that is almost mesmerizing to watch. The amount of situational animations lavished on the protagonists and even the enemies is incredible; new games in the series are still being released today using the same sprites and they still don’t look old almost 20 years later.

Porting the game intact to any system would be a tall order, least of all the PlayStation and Saturn. For the Saturn game the 1 meg Ram cart is required which bumped up the game’s price but was worth it. The game is more or less arcade perfect outside of some minor slowdown in the most extreme of circumstances. For all I know it might have been the same in the arcade, it’s been so long I don’t remember. The only concession made are 7 or 8 second load times in between levels and menus but I’ll take that over the midlevel pause breaks that plagued the PlayStation version.

Metal Slug is a near flawless conversion of an excellent game and one worth exploring for those looking looking to expand their Saturn library. While it is true that the Metal Slug Anthology exists that does not make this home port any less incredible.