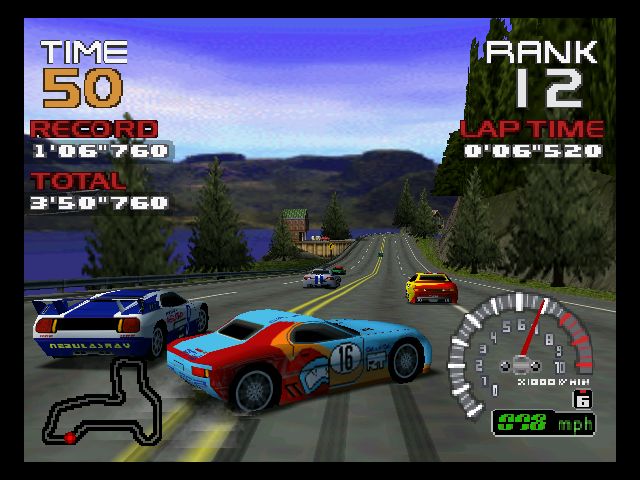 Back in the 32-bit era the thought of Ridge Racer or any Namco property appearing on a rival platform was pretty much blasphemous. Their partnership with Sony was one of the most lucrative in history but in the waning years of the generation there was nothing to lose in experimenting with a new user base. Ridge Racer 64 was born out of a collaboration between Nintendo and Namco and while it was yet another racing game on a system drowning in the stuff, come on, it’s Ridge Racer. The game was awesome and one of the best pure racing titles for the console.

Ridge Racer 64 is not a straight port of the original arcade game nor is it a completely original title. Much of its features and content are cobbled together from numerous titles in the series, most notably Ridge Racer and Ridge Racer Revolution. The decision to pull from those two games in particular is odd as Ridge Racer 4 was the most recent game in the series. For a game released in early 2000 it comes across as a polished throwback more than something new. Regardless of its content choices the game is generally excellent and has the RR feel which is even more impressive considering NST (Nintendo Software Technology) and not Namco were the game’s main developer.

The game offers a wealth of options to cater to fans of all prior games in the series. The game’s handling can be changed to mimic the original, Ridge Racer Revolution, or you can give the new RR64 variation a spin. If you liked the slippery drifting method of classic Ridge it’s been replicated here perfectly, down to the same collision detection and everything. For my money NST did a bang up job with their own method of drift as it feels the same as Namco’s but is more forgiving. You can recover from spin outs pretty quickly and even ramming into other cars is not as punishing. Pulling off insane power slides and 360 spins to gain speed is simple but not so easy that anyone can do it on their first try. It’s so well done in fact that I found it hard to go back which is a high complement.

Beyond just drifting the controls in general are incredibly tight. Depending on the vehicle tire grip is incredibly taut or loose and the differences between cars are tangible. Unless you choose classic settings there are far less spin outs and such, allowing you to focus on just reaching first place. The game is fast, especially in the latter stages of the Grand Prix where some skill at advanced driving techniques is necessary to progress. Don’t let the Grand Prix fool you into thinking this has simulation elements, the game is an arcade racer through and through.

The game’s single player content is extensive and gated; The Grand Prix groups its tracks in pairs of three and you must place first in each to progress. At the end of each grouping you are given the option to participate in a single race against a rival car that becomes available if you win in Car Attack. These races are definitely challenging at first since you are limited to the starting four lineup but with each new set of wheels you unlock further challenges become easier. In total there are 32 cars, with the last 8 requiring special conditions be met to unlock such as completing the Galaga minigames or even hitting the helicopter that is filming the race.

Although the game proudly displays how many courses it has in the Grand Prix mode in reality the track selection is the weakest element of the game. What appears to be twenty is actually simply three tracks; one from each Ridge Racer game and a completely original one for this game. Each comes with numerous different variations that somewhat approximates the feel of a new course but doesn’t always work. Changing the time of day is not anything new but reversing the tracks does genuinely give them a unique feel. The problem is you’ll get sick of what is available in short order not just in Grand Prix mode but because you’ll have to race on the same tracks in Car Attack to unlock new vehicles. The game does have a decent amount of stuff to unlock but the paltry number of tracks means you’ll be done with the game in short order which is a bummer as everything else about the entire package is well done. You could lobby the same complaint about most prior games in the series but by 2000 games like Gran Turismo 2 were practically overflowing with content putting efforts like this to shame.

For its time this was a great looking game with an amazing high frame rate and clean presentation. The car models are incredibly detailed with numerous specular highlights giving them a nice reflective sheen. The frame rate isn’t quite 60 but it rarely dips which is a feat unto itself given the hardware. The tradeoff made to keep it so high are blocky environments and less impressive lighting effects. The game definitely lags behind Ridge Racer Type 4 but some of that has more to do with the ported over tracks. The soundtrack does its best to ape the thrashing techno the series was known for and while it is decent it is forgettable in my opinion.

As the first Ridge Racer game to grace a Nintendo console RR64 was a resounding success. Although it could have used a few more tracks what is there is generally good enough to entertain for a few hours and far better than most of the generic racing games that plagued the system’s library.