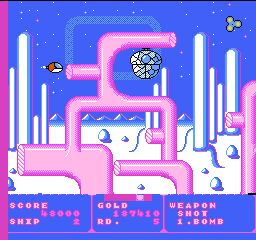 Fantasy Zone is a strange case in my video game playing history. Like After Burner I played it on the NES before ever learning that these were originally Sega games repurposed semi illegally by Tengen in those weird black cartridges. While I certainly was not a console fan boy (or even would have known what that meant at the time) I do think it would have felt kind of scandalous or seedy playing the competition’s games on your platform of choice. Fantasy Zone is a more than competent port of the popular arcade game but also pales in comparison to its superior Japanese counterpart.

Despite the Twinbee inspired look of Opa Opa Fantasy Zone has far more in common with Defender than that series, only cuter. Each level is free roaming as you pick off all the enemy generators before fighting the end level boss. The controls are simple but also take some adjusting to; even when you aren’t manually moving around the ship is still in motion. The screen doesn’t scroll until you get close to the edge which is annoying but due to the reduced enemy count it isn’t an issue. All enemies drop coins that can be used to upgrade your ship since there are no traditional power-ups.

The game keeps its weapon selection light and relatively cheap which is a bit disappointing but what it does have is particularly effective. There are only two additional weapons you can purchase, the laser and the wide shot, both of which have a limited duration. What’s actually pretty cool is that you can buy both and when one runs out a balloon will appear that will allow you to outfit your ship with parts again. The different engines and wings affect your movement speed which is important; the turbo engine is the fastest and allows you to scoop up coins quickly but is a detriment when it comes to dodging boss fire. You’re too fast and can slip up easily. There are bombs but truthfully I’ve never used them and have even forgotten they were in the game at times.

There is no time limit so you can spend as much time as you like picking off enemies to build up money for upgrades. Or you would if the game weren’t so sparsely populated. There are very few enemies at all times which is a sharp decline from the arcade game’s intensity. You have to actively seek them out and they’re in such small groups that there is very little challenge to be found. It doesn’t affect your ability to make money however since the generators give $10000 each and you’ll end up with more money than you know what to do with in little time.

The balancing in this version is completely screwed since it is very easy to destroy all the necessary targets within minutes due to a lack of enemies. Buying items in the shop will increase their price in the following level but you are so flush with cash it makes little difference. The only challenge comes during the boss battles which can be pretty intense, especially if you die since you lose all power-ups. But if you have played any shooter that is nothing new. The game’s eight levels fly by pretty quickly and I reason most will finish this in less than thirty minutes which is disappointing.

When it comes to the game’s presentation things become a lot more interesting. There are two versions of Fantasy Zone, one by Sunsoft in Japan and the other by Tengen. Sunsoft’s version of the game is pretty incredible given the disparity in hardware and paints a much more accurate picture of the arcade game’s bright visuals. Aside from resolution the level of detail is similar and generally excellent. Tengen’s port is shoddy in comparison. The color palette is way off and the backgrounds do a poor job of approximating the arcade’s look. Worst of all is the heavy flickering that occurs when even a few enemies are on screen. It’s still playable but certainly less than ideal.

I am far from being a weaboo but in this case it certainly applies; the Japanese version of Fantasy Zone is far better than Tengen’s reprogrammed port. Why they simply didn’t bring that version over if possible we’ll never know but at this point you can find arcade perfect editions of the game for nearly every console dirt cheap, making this extremely expensive game redundant.