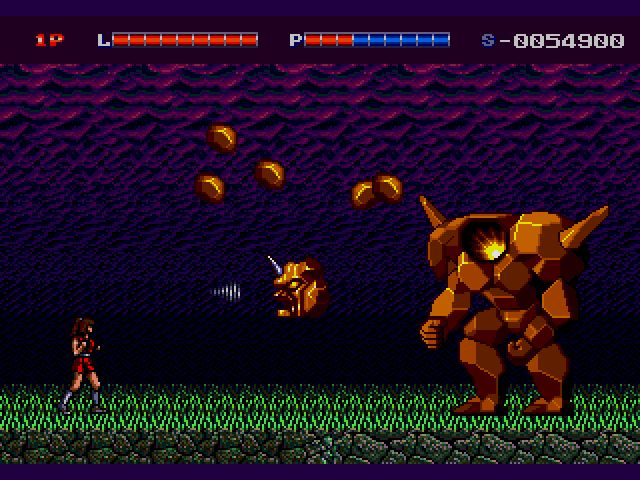 Sage’s Creation were an anomaly in the early days of the Genesis. As one of the few supporters of the system in the face of Nintendo’s strong arm tactics with third parties they certainly stood out for that reason. I can’t really say the same about their games though. All of their published titles were either interesting games let down by a few flaws (Devilish) or simply inoffensive average titles such as Insector-X and Shadow Blasters. Shadow Blasters in particular is the epitome of an average game that would soon be eclipsed by far superior titles, leaving it without an audience.

After millennia of guiding humanity the Gods are fed up. Somewhere along the way mankind lost its morals and became depraved. No longer wanting anything to do with them the Gods sealed the portals between their world and Earth. The evil God Ashura however saw this as an opportunity to conquer the world. After much deliberation his fellow Gods decided humans would be the ones to deal with this threat and assembled four of the most powerful warriors to stop Ashura.

The closest counterpart to Shadow Blasters would be Sega’s own Mystic Defenders and in fact it is eerily creepy just how similar the two games are. Both games feature protagonists whose primary means of attack consists of a spell that can be charged up for more power. They also have multi-tiered levels that offer up a large sense of scale. But where Mystic Defender was a solitary experience Shadow Blasters puts you in charge of a quartet of heroes.

Horatio, Marco, Tiffany, and Leo are your protagonists and you can switch them out much like TMNT for NES. Each possesses a unique weapon whose attack changes 3 times depending on how long it is charged. Marco’s electric orb will become a single blast of lightning, then a lightning bolt and finally 3 separate lightning bolts for example. Charging only takes a few seconds and as a bonus you can collect power-ups that permanently increase your attack power. At full power your level 3 attack becomes the default which is borderline game breaking. Each character has to be upgraded separately along with their jumping power but trust me, it isn’t an issue considering the rate emblems drop.

Aside from just their weapons each character’s attacks have different properties. Tiffany’s tornadoes track enemies but to counterbalance that she also takes more damage. Marco’s lightning pierces through enemies while Leo can have multiple boomerangs on screen simultaneously; it’s tricky to get the hang of but can be hugely beneficial in the long run. Horatio is kind of the everyman and is a bit boring by contrast.

Each of the game’s six initial levels can be completed in any order. While the levels run the platforming spectrum with a forest stage, fire (volcano) level, and a hike through the mountains a few take a different tact with you exploring a lab, the city streets, and even a future themed level. Despite the maps usually stretching a few screens each individual level is incredibly short and lasts a brief few minutes. That’s enough time to collect a bunch of emblems to power up or completely avoid combat in some cases depending on the route you take. If there is one major criticism of the game it’s that you aren’t pitted against enemies worthy of the overwhelming power in your hands. Most enemies are incredibly small and easily avoided and outside of one or two stages seem disinterested in you. Boss battles are the one area that the game really seems to generate any excitement and even then with the right character these can end in seconds.

Shadow Blasters is an incredibly easy game even for novice gamers, to the point where I’m reasonably sure most will complete it in less than an hour. Emblems drop so frequently that you’ll fully power each hero within the span of 3 levels and at that point you’ll blaze through the already short levels in no time. Even after close to 20 years and only a vague recollection of the game I still breezed through it with little trouble. Despite its eight levels the game is really short and with unlimited continues you’d truly have to suck at video games to not see all the game has to offer in an hour’s time and there is no reason to go back.

All in all Shadow Blasters is adequate. It neither reinvents the action platformer nor is it bad. But in the face of stronger action titles on the platform only the most desperate Sega enthusiasts will bother.