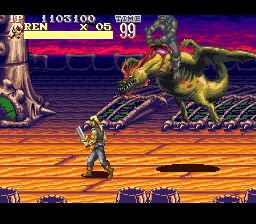 I have to say, as much as I loved side scrolling beat em ups by the mid-90s I was already growing tired of the genre. While we all praised Capcom and Final Fight for laying a foundation that the majority of games would follow we really were not prepared for the glut of crap to come. After Streets of Rage 2 middle of the road brawlers simply didn’t cut it anymore, a category that the SNES version of Pirates of Dark Water falls in. This could have and should have been better.

My first question is why a beat em up? The world and back story of Dark Water almost seems to lend itself to and adventure game, which we more or less received in the Sega game. Though flawed it captured many of the best elements of the show which I can’t say the same of this game. Outside of it’s the cast of characters you could just as easily have mistaken this for any of the innumerable brawlers on console or in the arcade as it does little with its license. The game plays relatively well but its pacing ruins it.

Ren, Ioz, and Tula fit comfortably into the established niches of well rounder, strong but slow big man, and fast but weak attacker. Unlike the vast majority of beat em ups Dark Water equips its heroes with a variety of moves. There are two separate attack buttons, a weak but fast melee attack that can be used to string together combos and a heavier attack with your weapon. Depending on when each button is hit during a flurry of blows you can execute a few different combos that will inflict high damage. Both buttons can also be used to modify your throws as well. You have the ability to block attacks and dash, which can be used to perform a lunging attack. It’s not Streets of Rage 3 level of depth but considering how lacking most similar titles were the combat is at least engaging.

Unfortunately the variety in your arsenal of attacks does not extend to the enemies you will face. Familiar henchmen from the show make appearances but for the most part you are going to face the same five or six enemies for the length of the entire game. To be fair this has always been a sticking point within the genre but at least most other brawlers hold a few enemies in reserve and slowly introduce new adversaries throughout the length of the game but here nearly the entire roster of Bloth’s men are introduced in the first stage.

This ultimately leads into the game’s most crucial flaw, its pacing. With so few different enemies to face the game tosses them out in waves, with as many as 7-8 in a row needing a swift end at your fists before you can move on. Tossing the tall and fat pirates (the game really isn’t very creative with its names) around gets really old fast, especially when you’ve just done precisely that not 5 minutes ago. It artificially lengthens the game when it wasn’t needed as this is already one of the longer fighters at 8 stages. The monotony is some of the worst I’ve experienced and if it weren’t for the fact that I rented the game and felt I needed to get my money’s worth I would never have bothered to finish it.

In spite of its issues the difficulty is median. The pirates possess decent AI and will block your attacks and strike at opportune moments. Health restoring fruit isn’t in abundance but does appear when needed as well as the occasional trap that you can lead enemies into. The bosses outside of one encounter are not the usual life sucking leeches typical of the genre and pose a fair challenge. If you can stand the repetition no one should have any trouble completing this on their first try.

Unlike the darker Sega game the SNES installment sticks closer to the brighter palette of the show. Familiar locations from the cartoon make an appearance and its most popular villains comprise the bosses. Overall the game is fairly decent looking; while Sunsoft were one of the most technically proficient NES developers their 16-buit efforts were more standard and while this wasn’t entirely developed by them it falls in line with the rest of their output.

This is as standard a brawler as they come and is disappointing as it doesn’t make any use of its license to stand out. There are better titles in the genre to scoop up before you should ever consider playing this average game.