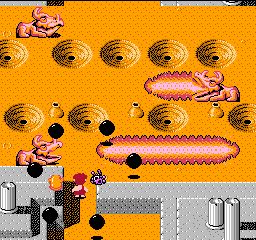 The Adventures of Dino Riki is a game that should have been decent but instead suffers from the types of bad game design and balance that most early NES efforts grappled with. For a game released in 1987 you could maybe overlook its problems but it took two years to make the trip overseas. By 1989 classics were being released left and right and old games like Dino Riki simply could not compete. What should have been a unique on the shooter genre instead is just a subpar effort.

Dino Riki is a top down shooter rather than the standard platformer you would probably expect. To me the game looks as though someone wondered what Adventure Island would be if it played from an overhead perspective. Riki vaguely resembles Master Higgins and even uses similar weapons like a hatchet, boomerang, and fire. Like Elemental Master and other similar titles the game auto scrolls as you dodge enemies and collect power-ups. Aside from the previously mentioned weapons there are a number of secondary items such as boots for speed, hearts to increase your life bar, meat to restore health, and wings that let you fly for a bit. Flight might seem out of place in a game of this type but that’s because Dino Riki adds a healthy dose of platforming into the mix and unfortunately it completely ruins the game.

A scrolling shooter apparently wasn’t good enough and so Hudson Soft decided some Mario style platforming that simply does not work. Most ledges are simply too small and thin to balance on and the addition of the constantly moving scrolling means you have little time to line up your jumps. Disappearing platforms are a nightmare and unfortunately moving lilypads don’t carry you with them, meaning you have to try and adjust so you don’t fall off. All of this while the game decides now would be a good time to throw some flying enemies at you. It is utterly broken and your stock of lives will drain fast dealing with this crap.

Good luck with that.

For such a short game the difficulty is off the charts. Enemies attack in relentless waves a good 30 seconds into the game and truth be told it almost never lets up from that point. If you have the fire it’s easy to deal with and maybe you can skate by with the boomerangs. But if you go below that you might as well get ready to reset the game. Taking hits and downgrading your weapons wouldn’t be so bad if it also didn’t drop your speed too. What sick bastard thought that one up? It makes gathering power-ups to avoid the death cycle nearly impossible.

Somehow the game finds even cheaper ways to kill you other than just hordes of enemies. Indestructible enemies abound and I find their placement extremely dubious. There’s nothing like trying to avoid a torrent of instant death fire only to be met with some unkillable dinosaur in a tight hallway while also trying to avoid falling into a sand pit. Yes, that is a real scenario that crops up frequently.   It leads to cheap hits that will more than likely leave you facing a boss with nothing but rocks and I’ll tell you right now; don’t even bother trying. Who knew that behind the game’s simple façade lies one of the most vicious games of that era?

Despite their technically being four levels the last one is simply a remixed versions of the initial three split into multiple parts. The stages tend to run pretty long and by the middle of it you just want it to be over. And for all of the trouble you might potentially go through if you play this game there is no conclusion, it simply loops again. Yay.

Even if all of Dino Riki’s flaws were amended it would still be a mediocre game. Some of this stems from the time of its release; in 1987 most developers were finally getting a handle on this video game thing and we would soon be graced by future classics such as Mega Man, Castlevania, and Metroid. By 1989 when this was released here the NES was on a roll, leaving first generation efforts like this looking like relics. You are better off playing Guerilla War, a similar title released the same year.