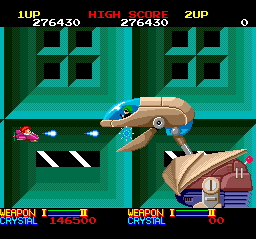 Generally speaking I’m not fond of overly cute games. I don’t want to give the impression that I’m some kind of man’s man but I can only take so much saccharine sweetness before my eyes glaze over. Ever play Paladin’s Quest? That was a little too much for me. I’ve mostly avoided the cute em up (it’s a totally made up name) but have dabbled in it here and there with the likes of Parodius and Death Smiles (such a deceptively excellent game). Ordyne from Namco shares that company but isn’t as good. This is a decent conversion of the arcade game and nothing more.

The cute em up subgenre of shooters has largely stayed out of the US and this was probably one of the very first to reach our shores. At first glance Ordyne gives off the impression of a parody or light hearted shoot em up like Parodius. Aside from its cute exterior however it owes most of its inspiration to Gradius. The enemy attack formations and even some of the enemies themselves look as though they came from Konami’s classic. It also borrows the forward facing cannon and missile/bombs for ground targets idea.

However where Ordyne differs is in its weapon system. Defeated opponents drop crystals of varying quantities that can be used to purchase weapons in the shops. Each shop has a different selection of three weapons which span the usual genre conventions. Three-way shots, the two-way after burner shot and a variety of different bombs comprise the list and unfortunately these are temporary. There are even a few esoteric weapons like the Stock Bomber, which manifests as a Pac-Man style shield that gobbles up enemy bullets.

One cool bonus in the game would be the Dream Co. Ltd. Robots that has a lottery that can award huge prizes, the most important being 20 or 100,000 crystals which can potentially set you up for the rest of the game. Good luck winning that prize though. You can also win power-ups but the chance of winning in general is extremely low but still worth the minor cost to participate.

Since the arcade game ran at such a large resolution the Turbo port makes use of an elevated playing field to contain all of the action. It works better than in most similar titles since you won’t have to deal with unseen enemies attacking from off screen. Some levels have more than one path to the exit which is pretty cool and can potentially save you a few lives. Unfortunately some things had to be cut to fit the game on a Hucard. Some of the cooler obstacles you faced were large rotating and spinning objects that required deft flying skills but sadly those had to be changed in the conversion and their replacements are just sad.

The weapon system is different but also isn’t as well implemented as I would like. You can only purchase one item before being kicked out of the store. The selection is randomized and unfortunately upgrades such as speed-ups (which really should be separate) take up spots on the list. Later in the game some items are bundled together but it doesn’t help matters much. Being stuck with a bunch of stupid bombs with an extremely limited supply is as your only choices is flat out bad. To the game’s credit there are least three shops in every stage but since weapons are limited by ammo or a time limit you are forced to rely on the standard cannons far too much.

Even without any special weapons and a gimpy regular shot that has no turbo (you have to buy it, get comfortable button mashing) this is of medium difficulty. The game is suitably lengthy but even with the standard fire it won’t pose much of a challenge outside of the occasional boss. If you tackled the game with a buddy in coop it becomes even easier since both of you can buy a different weapons and dominate. Even with just 5 continues I don’t see anyone having trouble beating the game on the first try.

As a port this version looks competent but pales in comparison to the arcade game. The multiple levels of scrolling in the backgrounds are completely gone, leaving the game with a flat appearance that is off putting. This is most evident while battling the first boss, a massive battleship in the clouds that was foreboding in the arcade with its thunder cloud filled sky but loses the effect at home with almost all of the clouds missing. The cool scaling and rotational effects are simply gone with static obstacles in your way. To the game’s credit it does manage to replicate nearly all other aspects of the arcade game’s visuals faithfully and it was released early in the system’s life but the system is certainly capable of better.

A bit too cute at times but otherwise solid, Ordyne overall is an above average shooter that isn’t thrilling enough to compete against the multitude of better games in the genre the system has to offer. Only the most dedicated of fans need apply.