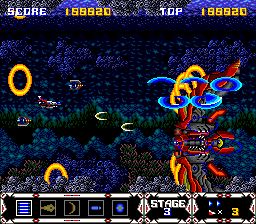 Where the Turbo Grafx and the Genesis shared many multiplatform shooters the same definitely could not be said with the SNES. It’s an irrefutable fact that the system’s slow processor hampered it when it came to the genre and so most developers wisely chose to either create new titles aimed specifically at either platform or didn’t bother. The lone exception to this is Thunder Spirits, a loose SNES port of Thunder Force III that in many respects shows exactly why the series largely stayed with Sega. While not a bad game it isn’t as good as its counterpart.

Calling this a port isn’t entirely accurate. Thunder Spirits is actually a port of the arcade release of Thunder Force III. While largely the same some stages have been removed with new ones taking their place and the graphics have seen a slight bump. To an outsider not familiar with the two the games they would seem to be identical. The SNES port of Thunder Force Arcade is pretty well done but suffers from heavy slowdown and illustrates the differences between it and the Genesis succinctly.

The basic gameplay is largely the same allowing veterans of the series to hop right in. Not all of the weapons have made the transition from Thunder Force 2 such as the Wide Shot and Destroy but they aren’t needed as the arsenal available is vastly overpowered compared to the game’s content. The Wave beam and the Front shot both cover so much of the screen that lesser weapons such as the homing shot can’t compete.

The vertical scrolling levels of the series second installment have been excised leaving a much stronger side scrolling shmup. Unfortunately they’ve also done away with the level select feature, not that it had any impact beyond running through the game in a different order just for the sake of it. Where this port and the arcade game differ are in their levels. Two planets have been removed, Haidis the cool underground world and Ellis the ice planet. The omission in particular is a huge blow as that was one of my favorite stages in the game. There replacements are lackluster in comparison. The generic star field of level 4 is eerily reminiscent of Eliminate Down and offers few thrills. One of the levels is even rehashed from Thunder Force 2! To make matters worse the game is missing a level, making this an even shorter journey.

The graphics are both impressive and disappointing at the same time. This was not an exceptional looking title even in 1990 and a year removed has only made this new version look worse in comparison. The game replicates the look of the Genesis original pretty well with all of the same nifty effects. But at the same time it also inherits its weaknesses, in this case very low color depth. It’s weird to see an SNES game this dark and dithered and a shame that they didn’t make use of its higher color palette and special effects.

The one area that the game suffers in the most is slowdown. This is bad, like even worse than Super R-Type and Gradius III. The frame rate slips into the single digits at times and the game even has flickering. The flickering is so bad during boss battles that you’ll actually lose a few lives because a massive fireball disappeared for a second or two. The extreme instances of flicker and slowdown stand out more than usual since the game runs identically to the Genesis game for the most part. The music does a very bad job of replicating the FM synth of the original soundtrack and the sound effects are heavily muffled; once again this is another element that could have been better.

The slowdown makes the game slightly more difficult but in the end this is still a pretty easy game considering how overpowered the weapons are. The generous respawn system (you only lose the currently selected weapon) means even the most weak sauce fan of shooters will complete this relatively quickly. I’m not a fan of overly difficult games but I do at least want some opposition and Thunder Spirits comes up short in this category unfortunately.

Thunder Spirits is a competent port of Thunder Force Arcade/Thunder Force III but could have been better. While this isn’t a bad game there are far better shooters in the SNES’s meager shooter library that only the most ardent fans will want to bother.