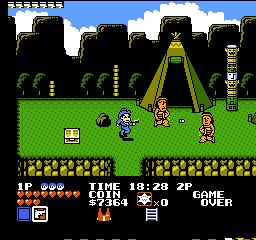 Legend of the Mystical Ninja came out of left field during the SNES’s launch window and delighted anyone fortunate enough to have played it with its heavily Japanese flavor and unique gameplay. Unfortunately it didn’t sell well enough to warrant localization of any of its three sequels which will forever be a god damn shame. I had no idea it was simply the latest in a long running series that dated back to the arcades and Famicom, nor did I ever know that a similar game in the same vein did reach our shores. Cowboy Kid is Ganbare Goemon in a western setting and just as awesome.

As rookie Cowboy Sam (and his Indian sidekick Little Chief in coop) you are elected sheriff of the city and tasked with bringing six of the most wanted criminals in the land to justice. They’re a motley bunch that wouldn’t look out of place in Sunset Riders with such “creative” names as Slash Joe, Coyote Jim, and Wild Wolf Chief. All jokes aside they make for one entertaining ride full of personality that barely anyone has heard of due to its 1992 release.

Cowboy Kid uses the same line scrolling playing field as nearly every side scrolling brawler as you explore each town on the way to arresting whichever criminal is causing a ruckus. Each level is completely nonlinear and you are free to explore to your heart’s content within the 20 minute limit. The freedom to tackle the game in any order gives it a Mega Manish vibe although outside of collecting the pistol that’s as far as it goes.

There’s plenty to see and do with shops that sell a variety of items, people to speak to and a surplus of minigames to indulge in. The overall proceedings have a light RPG tone but you won’t be increasing any stats outside of your life bar. All of these activities revolve around money which can be earned through killing enemies, the innumerable chests lying around, and putting up cash to participate in the various minigames such as Black Jack, the shooting gallery and a version of the circus strongman test. The shops offer a rotating list of items such as various foods and sometimes quest specific items.

All of this is fluff of course since you can just as easily skip it all and trigger the necessary story events to press on however you’ll miss out on the best the game has to offer. While most townsfolk only have silly things to say some will point you to helpful items that will save you some cash. The Wild West setting is fully realized through character dialogue and clothing and is a nice change of pace. The overall tone of the game is pretty comedic but never quite reaches the level of insanity of the series it mimics. It does have its moments though. You’ve got swordsmen, farmers, gunmen, even farm animals and ghosts wandering around as if there’s nothing wrong. If you’re too cheap to spring for a decent hotel room you can always opt to sleep in the horse stable!

Quite possibly the game’s only real flaw is its opening. In the beginning you are armed solely with a knife and while seeing a cowboy stabbing fools left and right is comical it isn’t very practical in use due to the game’s perspective. The game is fairly generous in terms of hit boxes, meaning you don’t have to line up perfectly with an enemy to hit them but the same applies to you. Depending on the levels you pick you’ll eventually obtain a long distance alternative but you have to find them first, meaning it is possible to miss out and end up stuck with the knife completely.

Inevitably the fun and games must come to an end and the race to apprehend each boss begins. For the most part these segments are regular side scrolling platforming with all that entails. I can safely say that no two stages are ever the same with the game doing its best to make each level unique. The chase for Coyote Jim is done on horseback in a top down sequence that feels reminiscent of Gun Smoke. There’s even a make shift mine cart sequence that is challenging but pretty fun. Where the general enemies are pushovers the bosses are actually significantly tougher and take an absurd amount of hits to go down. If the intention was to make these fights seem epic they overshot it with some dragging on for close to 10 minutes (Mad Brothers I’m looking at you).

In the end these are small complaints in an otherwise excellent package. Unfortunately Cowboy Kid is hard to find and goes for hundreds of dollars on the after-market. No game is worth that much in my book but should you find it at a decent price one of the most distinctive NES titles awaits.