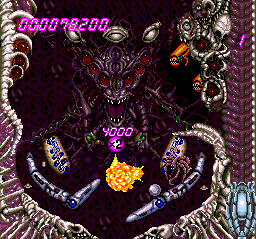 Alien Crush is a game that I went into with no expectations and was completely blown away. As one of the few Turbo Grafx-16 owners in my neighborhood let alone school I was forced to turn to rentals for new games and I can tell you the selection at Blockbuster was slim. After perusing the roster of about 10 games there Alien Crush was the last one and I was not enthused. Vague memories of Rock ‘N’ Ball soured my view of video game pinball but AC restored it with its excellently laid out table and movie inspired theme. Even today the game is still highly playable and good for a few hours of ball slapping fun.

While Alien Crush is a pinball game through and through what it has going for it that elevates it above similar titles it its art direction. The Alien inspired theme is executed wonderfully executed and permeates all corners of the table beyond just the background image. The table itself is composed of bone with small aliens, brains, and other creatures serving as targets and bumpers. The alien in the background of the bottom half of the table is incredibly cool as its eyes light up as you nail more of the little creatures on its sides and eventually awakens and is fully animated. The game does not try to hide its inspiration in the slightest and is better for it as the presentation really helped it stand out. For a game released in 1989 Alien Crush looks fantastic.

Your choice of either fast or slow ball speed has some bearing on the game’s control but regardless it still remains playable at both settings. Oddly both flippers are not controlled using the face buttons; button II will tilt the playing field while button I controls the right flipper. The D-pad manipulates the left flipper. It’s manageable after some adjustment but less than ideal; I’m sure I’m not the only one who has lost quite a number of balls pressing button II futilely. Why they didn’t go the route everyone would expect we’ll never know but luckily it doesn’t hurt the game too bad.

Once you’ve adjusted to the weird setup it’s all about scoring as many points as possible. The table is split into two sections with a brief pause as the view switches. Why the table isn’t one continuous map is a mystery as this is really unnecessary and the effect is quite jarring. Simply slapping the ball around will net you some points but to really gain the most points you’ll have to aim at specific targets. Smashing the aliens along the bottom half of the table is risky but worth it and will slowly awaken the mother alien in the background. If you can put the ball in her mouth you’ll earn a huge bonus. Occasionally a flurry of smaller demons will skitter across the screen and are worth big points.

The largest rewards come from the bonus rounds that offer up some variety from the alien shenanigans. Here the table is cold and metallic instead of pulsating and alive. The bonus stages pit you up against a unique set of monsters from a caterpillar demon, a smattering of skulls, to….Slimer from Ghostbusters. Seriously I defy you to tell me that isn’t Slimer. While I call them bonus rounds they feel more like mini boss battles although the stakes aren’t as high since you don’t lose any balls for failing. The rewards are worth it however as you can receive millions of points for completing these. You’ll need deft ball handling skills to actually reach them however.

The one thing Alien Crush lacks, and I’ll admit this is purely subjective on my part, is an end game goal. I’m sure most play pinball games purely for high score but here the game feels a bit empty without some purpose to work toward. If you manage to reach the maximum score of 999,999,990 points the game ends but all you’ll get for your trouble is a simple congratulations. While that number seems preposterous a decent player can manage that in about an hour or so luck permitting. With just the one table it will leave you wanting more.

Regardless of its lack of content (a criticism you can make of many pinball games) Alien Crush is still worth a purchase, especially since it is dirt cheap and has been re-released for numerous platforms. Despite its low profile fans of the series absolutely love it and with good reason.