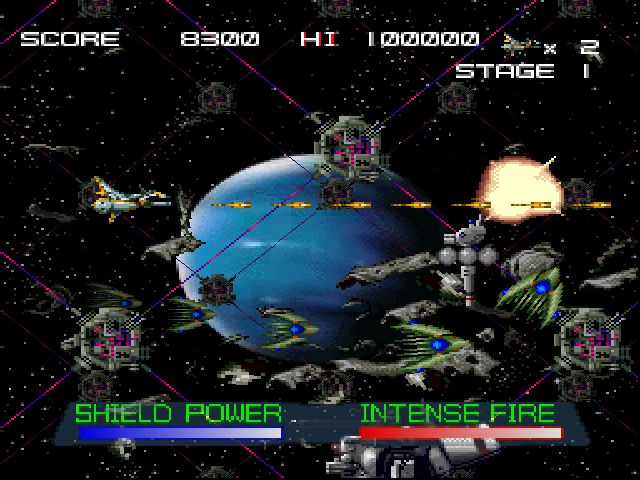 I’ve always been fascinated by the expensive, rare import games. You hear stories of games like Radiant Silvergun and Psychic Assassin Taromaru that used to routinely fetch anywhere between $150-300 on Ebay and wonder what all the fuss was about. Limited print runs or publishers going out of business tend to make even mediocre games desirable; luckily Gaia Seed doesn’t have that problem. Although its original publisher is long gone thanks to monkeypawgames everyone can play this solid shooter at a fraction of its after market price. Is it one of the best PlayStation shooters? Far from it. But for 6 or 7 bucks you could certainly do worse.

The power-up system is kept fairly light but the options available are more than enough to suffice. The main cannon has two options, the Blue laser or the Red Needle shot with each powering up three levels. The laser is more or less exactly what you would expect, a thin but powerful beam of force that expands in size with each level. The Needle shot becomes wider with each upgrade though not as much as it probably should have. Secondary options are the Green Cipher Wave, which fires blobs of homing energy and the useless Yellow Energy Blaster, which is more or less another needle shot. Lame.

Two of the most interesting features are the regenerating shield and “Intense” fire. Like the shooter equivalent of Halo both will slowly regenerate over time, effectively granting infinite life if you are careful. Amazingly it is balanced fairly well; random shots inflict enough damage that you’ll die in 5 or 6 hits yet it charges fast enough that you can afford to make a few mistakes here and there. The Intense shot depends on your main weapon, with the needle shot producing a series of homing lasers straight out of Panzer Dragoon and the laser emitting a boss decimating beam of destruction. This regenerates slower so it can’t be spammed; at most you might get two shots during a boss battle.

While the regenerating shield mechanic doesn’t completely break the game overall this is still a fairly easy shooter. On normal a fully charged laser can almost completely destroy a boss in one burst. Hard isn’t that much different either; you simply take more damage from stray bullets. Since you respawn instantly upon death you can easily zerg your way through the more difficult situations in the game. Five continues sounds fair but that is actually overly generous; I only used one to reach the end and I was only playing half seriously. Bottom line no one should have any trouble seeing the game’s conclusion.

Each of the game’s seven levels is nonstop chaos as there is rarely a moment when a stream of enemies isn’t pouring in. The complex bullet arrays and mix of bad guys were clearly designed so that you would prioritize your shields; I doubt it would be possible to get through the game if a single hit resulted in death. I would have liked to have seen at least one more weapon type as the two available while functional never seem as powerful or fun in their usage as they should be. While the levels cover the majority of the standard shooter tropes (asteroid field, doing battle amidst an armada of ships, etc.) the timed boss battles do present some challenge. Most bosses will shed their armor or change forms multiple times before dying and are usually equipped with massive shield draining lasers. The timer isn’t as much of a factor as you would expect until the final level, where your decision to let the end bosses live will determine which of the three endings you’ll receive.

In terms of visuals Gaia Seed resembles many an SNES shooter and even has Mode 7 style effects sprinkled throughout. That isn’t a knock against the game but it is a bit underwhelming, especially compared to games like Lightening Force and Axelay. There are definitely elements that could not be done on a 16-bit platform such as the large multi-jointed bosses and some of the special effects going on in the game’s backgrounds. While the game isn’t impressive technically artistically it has its moments such as the massive debris field of stage one and the line scrolling background of stage 3. The soundtrack is excellent, blending many different styles of music together in one aural package that is surreal yet fits the action pretty well.

Gaia Seed is a fairly conventional shooter that doesn’t break any new ground but is as solid as they come. Previously the game commanded large sums of money but thanks to its PSN release through Monkeypaw games it can be had dirt cheap. If you are a fan of shooters it will provide a few hours of entertainment.